Today, regular contributor Bart sent me a Calvin and Hobbes cartoon, which I enjoyed, since that was the best comic strip in the history of cartooning, by far. Neither Peanuts nor Doonesbury nor Bloom County nor Overboard ever came close to Watterson‘s brilliant strip, which combined unbelievably deft and communicative artwork with brilliant, unique ideas and perfect dialogue. Every line he drew was essential, and alive. It was amazing.

This reminds me of Robert Ariail, who would say the same. In fact, one big reason why he and I didn’t follow through on the comic strip we planned for years to do was that Robert didn’t want to do it unless it was going to be as good as Calvin and Hobbes — which I thought a ridiculously high standard.

But perfectionism can pay off, as it has yet again for Robert — he is the 2012 Individual Artist winner of the S.C. Arts Commission’s Elizabeth O’Neill Verner Award: 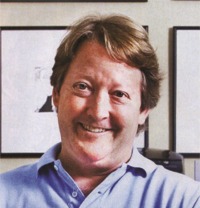 Robert Ariail is a nationally syndicated editorial cartoonist based in Camden, S.C. From 1984 to 2009, Ariail wielded pen and ink to capture the mood and viewpoint of the day as the editorial cartoonist for The Statenewspaper. With his entertaining and recognizable style, Ariail provoked thought, fueled controversy and poked a little fun as a satirist, storyteller and critic. He had the knack for channeling the spirit of the state, be it pride or frustration. His art and his satire continue to be available to readers through his work at the Spartanburg Herald-Journal and in more than 600 newspapers across the nation. Ariail has also published three collections of his cartoons.

A two-time finalist for the Pulitzer Prize, in 1995 and 2000, Ariail was the first American to win the prestigious United Nations Ranan Lurie Political Cartoon Award, triumphing over a field of more than 1,500 cartoonists from around the world in 2009. A sample of other awards include:

Says Ariail of his work: “I try to give my readers a chuckle, perhaps even a guffaw on occasion. I’d even settle for a raised eyebrow,” says Ariail. “I don’t take cheap shots, but I like to make a point. I want my cartoons to say something, or at least to show the irony of a situation.”

Full disclosure — I nominated Robert for this. He did all the rest. As always, I am proud to know him, and thankful to have had all those years to work with him.

7 thoughts on “Congratulations, Robert, on the Verner Award!”