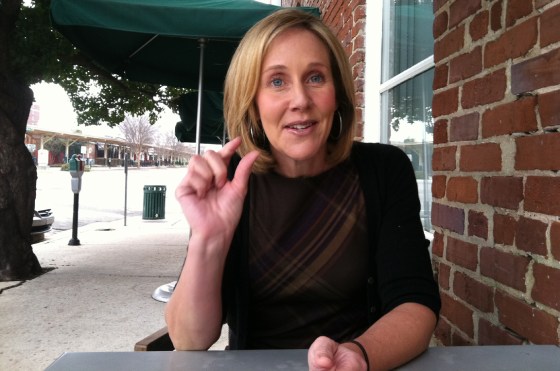 She said that most of her original desire to run arose from a wish to raise the overall tone of politics. Only THIS much had to do with her personal encounters as a TV reporter with Jake Knotts.

As previously mentioned, I met Kara Gormley Meador over at Starbucks for coffee today, to talk about whether she is going to run for the state senate.

As you’ll recall, Ms. Meador had intended to oppose Jake Knotts in the GOP primary in District 23, but learned that she had been misinformed by officials who told her that she lived in that district, under the new lines. She thought she had done due diligence — she had even requested a new voter registration card, so she could have it in writing — but what she was told was wrong. Under the reapportionment, she will be in District 18, currently occupied by Ronnie Cromer.

So will she run against Sen. Cromer? She hasn’t decided. She said she even thought that maybe she would make up her mind while talking to me. I don’t know whether the talk with me helped, but in the end, for what it’s worth, I told her she should run — for something.

I say that not to endorse her over Mr. Cromer or anyone else. I just think she is a positive, energetic, knowledgeable young person who would be a positive force in our General Assembly.

Does that mean that I agree with her on everything? Hardly. As she wrote on this blog recently:

I’d like to dismantle or revamp the House and Senate ethics committee. As they stand, neither body has any teeth to penalize legislators when they act in an unethical or illegal manner.

I am for complete transparency.

I don’t believe our legislators should offer certain companies back room deals that include huge incentives and tax breaks to try and lure them to our state, while folks who have been doing business here for years get nothing.

I have a lot of thoughts when it comes to education. We need to analyze administrative costs and see where we can scale back or consolidate and make sure we pay our teachers a fair wage.

I believe in school choice to include the creation of more charter schools; and to allow children in rural public schools to have the same choices offered to students in other districts in their counties. For example: students in Batesburg-Leesville have only one elementary school in the district, but students in Lexington One have the chance to attend any of the districts elementary school if there is availability. I think a student should be able to cross district lines– especially if they are located in the same county.
(there’s a lot more to this– if you are interested I’d be happy to tell you more)

We need to cap government growth.

I feel that across the board cuts are a cop out. As a legislator in times like these, you need to make some tough cuts in order to pay the bills. I don’t use credit cards to pay for things I can’t afford. I don’t believe our legislators should spend money that way.
One way we could save money is by shortening the legislative session.

I also believe legislators should have term limits.

She worries about spending time away from her kids, but she wants a better South Carolina for them. And she made a point that I particularly appreciated. She said that when she wants a better future for her kids, she actually means that she wants a better one for all of the state’s kids — unlike so many other who say that. I nodded at that, because it took me way too long to realize years ago that when Mark Sanford wanted a South Carolina in which his sons could stay and have a bright future, he wasn’t referring to the boys as a microcosm — he literally meant that he wanted a better future for his sons, period. That’s the libertarian way.

Kara says she knows she sounds like a Ms. Smith Goes to Columbia, and she does. But I like that.

While she feels the pull of her children, “God has given me one life,” and “I’m extremely driven, and I love people.” She was bowled over by the enthusiastic response she got on Facebook that one day that people thought she was opposing Knotts. She told me that some of the folks she heard from were people she had reported on over the years, some of them crime victims (a particular interest for her) who appreciated having their stories told.

She likes the idea of being a voice for those who think they have no voices. “Maybe I should get in to prove to somebody that they could get in, too.”

So I’d like to see her run — for something. 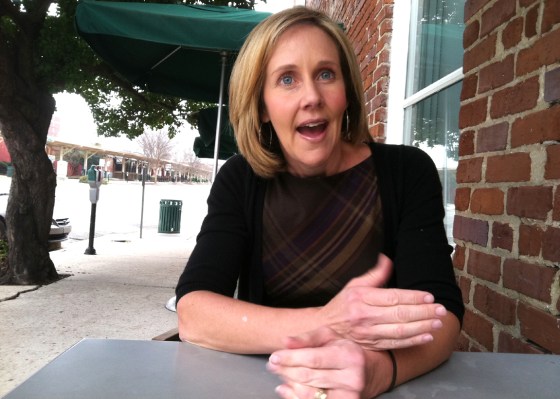 Throughout the interview, I could see the light of enthusiasm in her eyes as she spoke of the possibility of making a difference.

25 thoughts on “Kara should go ahead and run for SOMETHING”