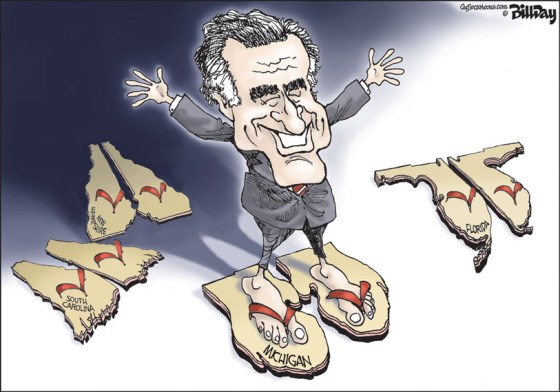 My friend Bill Day in Memphis sent out this cartoon, which depicts the main rap on Mitt Romney — that he changes his mind.

To me, that’s the man’s saving grace, to the extent that he has one. It’s what made me able to settle for him after Jon Huntsman dropped out of the SC primary — I believe he’s free of slavish devotion to any man’s ideology. That makes him anathema to the extremists in his party, but that’s not the only think I like about this trait.

Whatever else you can say about a man who changes his mind, at least it proves that he’s thinking. Even if all he’s thinking is, “I need to change on this to get elected,” he’s at least thinking.

Here’s my take on Romney: He simply doesn’t care deeply about the kinds of things that left and right tend to get angriest about, such as the Kulturkampf issues that I wish would stay out of our elections. Basically, he sees himself as a manager — he wants to run the United States as he has run other enterprises in the past, no matter what burning issues happen to be at the fore when he’s in office. He believes his executive experience makes him better able to run the country than Barack Obama.

Set aside whether I believe he’s right, I appreciate that that’s the way he seems to approach this.

To some extent, this is akin to what appealed to me about “No-Drama Obama.” I saw him as essentially a pragmatist, particularly on the thing that matters most in picking a Commander in Chief — international affairs and security. His adoring supporters heard something that they liked in what he said on the stump about war and peace and international relations, but I listened a bit more closely than many of them did — it was (as always) the first thing I asked him about when he was sitting next to me in the editorial board room, and I was satisfied with his answers. And I was not surprised when he embraced continuity once in office (although I was surprised when he became even more aggressive than George Bush in prosecuting the War on Terror).

I get a certain amount of that same vibe from Romney, and that’s what reassures me when I think of the possibility (not a very strong possibility at this point, but still a possibility) that he could replace Obama. I don’t think we’d see any dangerous shifts in the policies that matter. And when faced with an unforeseen crisis, I think he’d approach it with sober deliberation.

I am not, however, convinced at this point that he would do a better job than the incumbent. But I’m still watching.

14 thoughts on “Let’s hear it for the flip-floppers — compared to the rigid ideologues, they are a breath of fresh air”