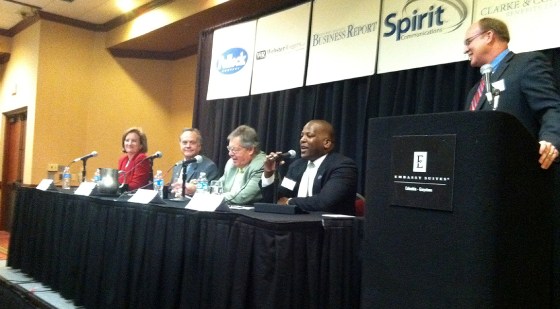 The panel laughs after moderator Bob Bouyea asked what should be done about traffic on I-126 and other paths into Columbia, and Steve Benjamin replied, "Everybody could live downtown."

This morning — very early this morning — I attended the latest “Power Breakfast” sponsored by the Columbia Regional Business Report. So did a lot of other people, packed into a ballroom at Embassy Suites.

I’d like particularly to thank the friends who joined us at the ADCO table, right up front:

We were there to listen to four mayors — Steve Benjamin of Columbia, Randy Halfacre of Lexington, Elise Partin of Cayce, and Hardy King of Irmo — talk about metro issues.

You may note that that was the main theme at last year’s panel. You’d be right. But last year it was more about something to be grasped at. This year there was more of a sense of something achieved.

A lot of this arose from the experience of landing Amazon. One hears that a lot among folks who work in local government, and economic development, in the Midlands. Which is interesting. It started out as such a divisive controversy, in the Legislature, with the governor not helping a bit and lawmakers at each other’s throats. I had my own ambivalence about the deal at the time, but those who are dedicated to bringing jobs to the community were undivided in their minds, and undivided in the collective sense.

It seems to have been a rallying, bonding experience that carries over into many other areas.

Time and again this morning, we heard expressions of comradeship, a sense of all being in this together, that swept aside the political boundaries that have been an excuse to get nothing done in the past. We heard it a little less from Hardy King, who tended to answer questions entirely from an Irmo perspective, but he’s new, and hasn’t been through the same bonding experiences as the other.

Last year, the mayors were still stinging over the failure to come together effectively over the Southwest Airlines matter. This year, there was more reason to celebrate — and not just Amazon, but Nephron and other economic development wins for the whole community.

A lot of other issues were discussed — Ms. Partin mentioned the 12,000-year history park in her city, Mr. Benjamin said with regard to mass transit that “It’s hard to get Southerners out of their cars,” Mr. King spoke of his town’s 0 percent property tax rate, and Mr. Halfacre told us about what his citizens ask about almost as much as they ask for traffic relief: sidewalks.

But I’ve been away from home 12 hours now, and I hear my dinner calling.