In Just 90 Days, through the Kingdom Assignment, Students Raise Money to Further the Kingdom of God

Thursday, February 9, 2012, Columbia, SC Trinity Cathedral’s Episcopal Youth Community (EYC) is making a big impact in their parish and in our community. In November of 2011, Canon Brian Silldorff challenged 11 members of EYC to participate in the Kingdom Assignment. The result? More than $60,000 to fund an array of projects, both sacred and secular.

After teaching a Sunday school lesson about the Parable of the Talents, Silldorff challenged eleven youth to participate in the Kingdom Assignment and entrusted them with $1,100 and offered just three rules: 1. The money belongs to God and is entrusted to you. 2. You have 90 days to further the kingdom of God with your talent and treasure. 3. You must report back in 90 days about your project and its success.

It’s now 90 days later and the Kingdom Assignment project will culminate during Youth Sunday School on Sunday, February 12, 2012 at 10:15am in the Workshop. Students, adults, and those impacted by the project will be present along with parishioners and the media to celebrate the impact and reach of more than $60,000.

You are invited to join in the celebration and share in the success. Please email Brian Silldorff if you plan to attend as space is the Workshop is limited. The Worskshop is located on the ground floor of the Trinity Center for Mission and Ministry located at 1123 Marion Street, Columbia, SC 29201.

Way to go, kids! I’m proud of you. Even though you’re not Roman. At least you’re catholic. You know, my cousin is one of y’all’s priests.

This reminds me of the best sermon I ever heard from my own pastor, Msgr. Lehocky. It was so long ago, he probably doesn’t remember it, but I do — the main points, anyway.

I’d always had trouble with that parable — you know, the Capitalist Parable:

14`The kingdom of heaven will be like the time a man went to a country far away. He called his servants and put them in charge of his money. 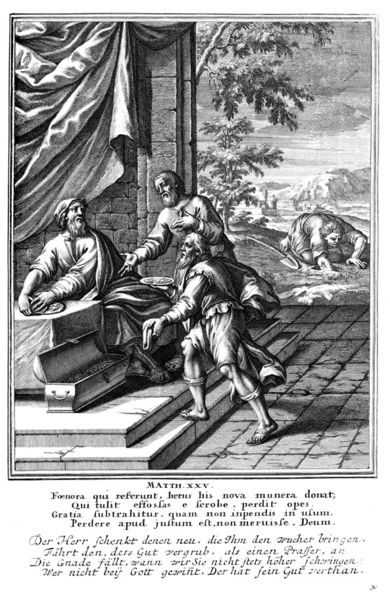 19`After a long time, the master of those servants came home. He asked what they had done with his money.

21`His master said, “You have done well. You are a good servant. I can trust you. You have taken good care of a few things. I will put you in charge of many things. Come, have a good time with your master.”

23His master said, “You have done well. You are a good servant. I can trust you. You have taken good care of a few things. I will put you in charge of many things. Come, have a good time with your master.”

24`The servant who had been given one bag of money came and said, “Sir, I knew that you were a hard man. You cut grain where you did not plant. You pick fruit where you put nothing in.

25I was afraid. So I went and hid your money in the ground. Here is your money.”

27You should have put my money in the bank. Then when I came home, I would have had my money with interest on it.

28So take the money away from him. Give it to the one who has ten bags.

29Anyone who has some will get more, and he will have plenty. But he who does not get anything, even the little that he has will be taken away from him.

30Take this good-for-nothing servant! Put him out in the dark place outside. People there will cry and make a noise with their teeth.” ‘

Not that I have anything against capitalism; I don’t. I just didn’t like it that Jesus was suggesting that the third servant had done something wrong. I mean, if someone else asks you to hold his property, shouldn’t you take every precaution to preserve it and have it ready to give back to him? Doesn’t basic honesty require that? Capitalism is a fine thing, with your own money. But do you have the right to take a risk with someone else’s, without specific (preferably written) authorization?

The risk part was what got me; that’s what seemed wrong. It was too easy to fail.

Father Lehocky urged us to look at it in a whole new way. He said people who play it safe are wasting the talents or other gifts they are entrusted with. OK, I sort of got that, but what if they fail? What if they do?, he said. Failing is part of life. You can fail big-time, and by doing so advance the cause of God. Look at Jesus himself. Was there ever a bigger failure? Look at the way he died. Charged as a criminal, whipped nearly to death, stripped naked and nailed up on a gibbet like an animal for the unfeeling community to watch his death-agonies. Abandoned by his friends, who ran like scalded dogs before the bully boys and denied even knowing him. Not a word he’d said had ever even been written down. All over, all done with, all for nothing. He’d taken a risk, and failed spectacularly, by every standard the world had for judging such things.

Except that he hadn’t, as it turned out. He’d really started something. The risk he’d taken had paid off in a way no ordinary mortal would have predicted.

That sermon made me think differently about my life and how it should be lived. It made me look at failure in a new way. Not that I’ve always lived up to that new way of looking at life. But it made me think. And now that I’m writing this, I’m thinking about it again…

23 thoughts on “Taking a risk with a mustard seed”