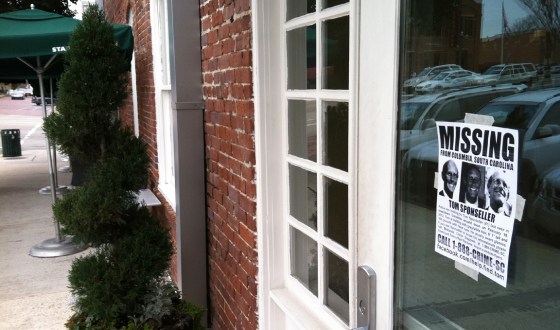 Last week, I had been set to have lunch with my friend Bob McAlister, but he suddenly had to cancel because of a new client — he was representing the S.C. Hospitality Association in dealing with the media with regard to the disappearance of its CEO, Tom Sponseller.

Today was the day that we’d set for the rain check. We had just sat down with our food from the buffet at the Capital City Club when another diner came over, smartphone in hand, to tell Bob: “They’ve found Tom’s body.” In the parking garage. And Bob had to run out.

Later, on the way back to the office, I saw The State‘s John Monk and Noelle Phillips outside the building on Lady Street that houses the Hospitality Association’s offices. Chief Randy Scott had just given reporters the barest of details, and now the Association’s employees were being told what was known.

I asked John and Noelle the most obvious question: How do you not find a body for 11 days in a parking garage? The reporters told me they had searched the place themselves last week, and that there were several doors opening off the garage that they were unable to enter.

This is what little has been released so far:

The body of missing lobbyist Tom Sponseller has been found, according to Columbia police.

Sponseller killed himself, said Columbia Police Chief Randy Scott. His body was found in a lower level of the parking garage at 1122 Lady Street just before 11 a.m., said Jennifer Timmons, a Columbia Police Department spokeswoman. The S.C. Hospitality Association where Sponseller was chief executive officer has its headquarters at the building.

Investigators found the body in a double enclosed room as they were conducting a follow up check of the building, she said.

Police have searched the building multiple times, including a search with dogs trained to find cadavers, Timmons said.

A 2 p.m. at Columbia police headquarters is planned, Timmons said.

As John and Noelle headed over to the police department for that presser, I left them. I’m sure they will have more to share soon. 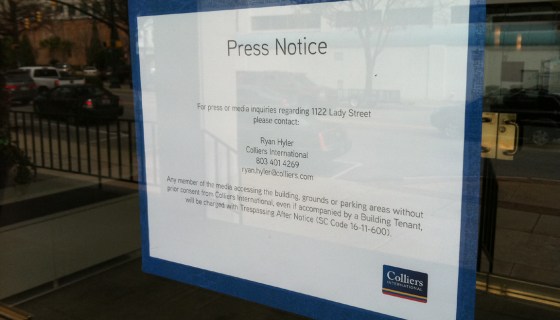 One reason I found the reporters out on the street is that they were barred from entering the building where the SC Hospitality Association has its offices.

42 thoughts on “The stunning news about Tom Sponseller”