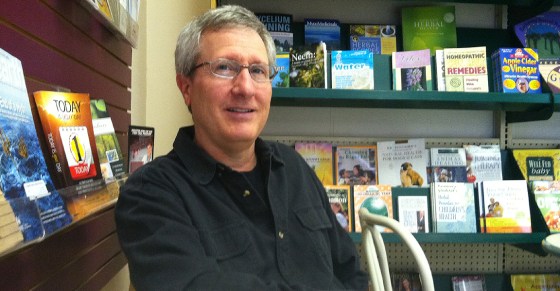 Mike Miller left The State in 2003, six years before I did. Since then, he’s been “exploring the calmer side of life.”

He’s been exploring it from the sedate and homey Rosewood neighborhood where he lives. It was at a fixture of the neighborhood, Rosewood Market and Deli, that we met recently to discuss his candidacy for the District 3 seat on Columbia City Council. He stops in there regularly for coffee in the morning. It was a regular lunch spot for me when I worked at the paper, and I still stop in there for some beans and rice and falafels now and then.

This was only the second time I had seen Mike since he had left the paper. The first had been at this event just over a year ago — the kickoff of the “One Book” project led by Belinda Gergel, whom Mike is seeking to replace on city council. I say that to satisfy the curiosity of those who wonder whether I  have sufficient detachment in writing about a former colleague. Mike and I were never close, and our work never overlapped, even when I was in the newsroom — he wrote about popular music and nightlife in Columbia (as his successor Otis Taylor does now), while I supervised reporters covering political news. I knew him the way I knew The State‘s movie critic, back when it had one.

So anyway, to get back to the subject at hand, Mike is running for the District 3 seat. He’s the only one of the four candidates who  lives in Rosewood. That makes him, in Kevin Fisher’s estimation, the “beer-and-chips” candidate, opposing the “wine-and-cheese crowd” of Shandon. I failed to ask Mike about that, but I get the impression he’d be comfortable in that role.

Mike, whom I never knew was that into politics back in the day, has been edging up to it for some time now. He got involved in the Gergel campaign four years ago, after which he says the councilwoman encouraged him to serve on some city committees. For instance, he later served on Mayor Steve Benjamin’s transition committee on the arts and historic preservation.

Probably most relevant to his candidacy is his service as vice president of the Rosewood Community Council. Through the council he has worked to improve parks in the area, and set up community crime watches.

Looking at the city as a whole, he complains that “We never really think big or act big.” He points to how long it’s been since any kind of community improvement on the scale of relocating the railroad tracks to help the Vista develop. With regard to big projects that the city is considering now — the Bull Street redevelopment, the Assembly Street plan, the Innovista — he sees a need for more long-range planning, since such things “have to be done in phases.”

He does see the city starting to “get over inertia” and move forward on some things, which is one reason why “the timing is kind of right to be on city council.”

He acknowledges that there are a lot of things city residents would like to have, but haven’t identified a good way to pay for. He supports the penny sales tax increase, “with the stipulation that the money go to support the buses.” He criticized the city for having taken over the bus system without a clear plan to pay for it after the cash from SCANA ran out. He used to ride the bus from Shandon the Main Street when he visited his grandparents as a kid (Mike grew up in Dillon), and indicates he’d like kids in the future to have such a resource in the future. He wants the service to be better than it is now. He sees restored “dollar-a-ride” trolleys in the center city as part of the transit solution.

Mike is spending less than other candidates. He hates yard signs, he says, although he’s been persuaded  to shell out for a few. Actually, I think they’re probably the best-looking ones in this campaign (see below). They were designed by another former colleague from The State, design guru Rob Barge. Here’s what Mike has to say about them on Facebook:

Sheesh, political yard signs, what are you gonna do? Everybody said I had to have them, so I got ’em. And you can have one, too. Send me an email at mikeforcolacouncil@gmail.com, and I’ll deliver.

But here’s the thing. Not only will I deliver, I’ll also come and pick up the sign and recycle it after the election. In fact, I pledge to recycle all my yard signs. I even contacted the city’s office of Planning and Development Services, which issues regulations regarding the placement of political signs, and asked is there was a plan in place for the recycling of these signs. I was told there were no official guidelines for yard-sign recycling, but it was something that should definitely be considered.

So I encourage all my fellow candidates to recycle their signs after the election, and I hope everyone will encourage the city to put a plan in place that calls for the appropriate recycling of political yard signs…

He says he’s “trying to knock on some doors,” but doesn’t seem to be approaching the task quite as ambitiously as opponents Daniel Coble and Moe Baddourah. He’s also frequenting civic meetings.

While he wants to see the city embrace ambitious changes, there are some changes he’d like to see impeded. He finds it incredible, for instance, that city council’s initial vote to say yes to a downtown Walmart was unanimous, 7-0. “You mean nobody raised their hand?” He indicates he would have raised questions, partly because he considers Walmart to have a history of being a “poor corporate citizen,” but also because of the environmental questions particular to the old ballpark location. 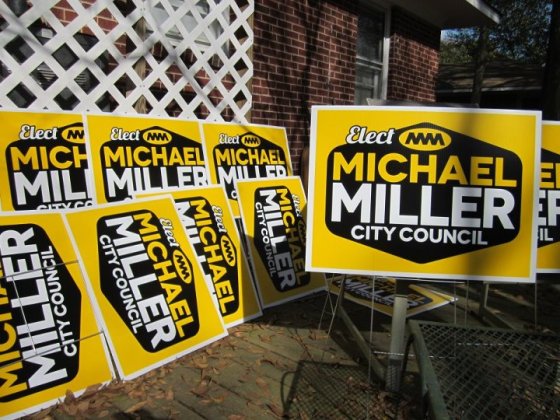 4 thoughts on “Michael Miller, candidate for the District 3 seat on Columbia City Council”