I’m kind of thinking this isn’t going to go over all that well, given the way some of y’all reacted to the news that my “twin” had endorsed Cameron Runyan, but I pass on this statement from the Coble campaign anyway:

“Daniel Coble is the one candidate in the race for City Council in District 3 who understands what it takes to fight crime and make our community safe,” said Sheriff Leon Lott in a statement released Monday by the Coble campaign. 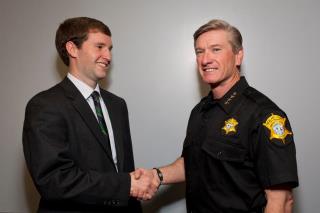 The Democratic Richland County Sheriff, first elected in 1998, said “Everycandidate talks about crime prevention but only Daniel Coble has put forward a specific plan to make it happen, and that includes replacing the city’s aging police department vehicle fleet, upgrading communication equipment, putting more officers on the street, targeting gangs and installing more cameras in high crime areas. Those things will make real difference.”
“In short, Coble has the best grasp of aggressively fighting crime in Columbia and that is why I have made this endorsement. If crime is your issue, Daniel is the candidate to vote for next Tuesday.”