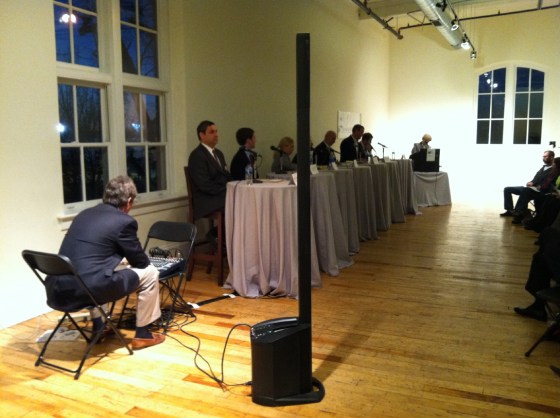 The candidates were hard to see, but the sound quality was good.

The event, sponsored by Rosewood Community Council, Sustainable Midlands and the Rosewood Merchants Association, featured all of the candidates for both the at-large seat being vacated by Daniel Rickenmann and the District 3 seat currently held by Belinda Gergel.

That format, with seven candidates not all running for the same job, was a bit unwieldy. And the staging — with the candidates sitting in shadow with bright pools of superfluous light to either side of them — was ideal for making photographers want to pull their hair out. But dim as it was, it was the first look I’d had at both of these lineups, and I found it useful, as I expect the audience did.

You can read an account of the forum — “debate” would be misleading — at thestate.com.

Here are a few additional comments of my own:

As Carolyn indicated in her story, the sharpest disagreement — really, the only disagreement — was over Richland County sales tax increase that is the only plan this community has come up with for paying for bus service for the Midlands. Which tells you where I stand, as if you didn’t know already. Since a city without public transit might as well go out of business.

The candidates with the best answers on that were Cameron Runyan (running for the at-large seat) and Daniel Coble (running in District 3). Both offered passionate, even vehement, support for the sales tax increase as essential to the community going forward. Beyond those two there was a second group (Jenny Isgett, Mike Miller — both District 3 candidates) who were sorta kinda for it, but with caveats. Then there were Joe Azar and Robert Bolchoz (both running at-large), who expressed the strongest skepticism for the plan. (For some reason, I don’t have what Moe Baddourah — the other District 3 candidate — said on the issue in my notes. Blame me for that, not him.)

Beyond that, I have scattered impressions. There was general agreement, and not only from small businessmen Baddourah and Azar, that the city makes it too hard to do business. When the candidates were asked about Famously Hot (yay, ADCO!), Mike Miller said his favorite part of the campaign was the “surprisingly cool” — which he said was accurate (as former music writer at The State, Mike was the only one on the panel who has actually been a professional arbiter of what is cool). Jenny Isgett diagnosed the city as suffering from ADD, with the symptoms being the inability to pick priorities and see them through.

I look forward to learning more about what differences exist between these candidates and sharing what I find with y’all. I also need to see what’s happening, if anything, in the 2nd District, where Nammu Muhammad is challenging Brian DeQuincey Newman.

But this was a start — actually, a belated one. The election is just under a month away — April 3.

84 thoughts on “SRO crowd turns out for council forum”