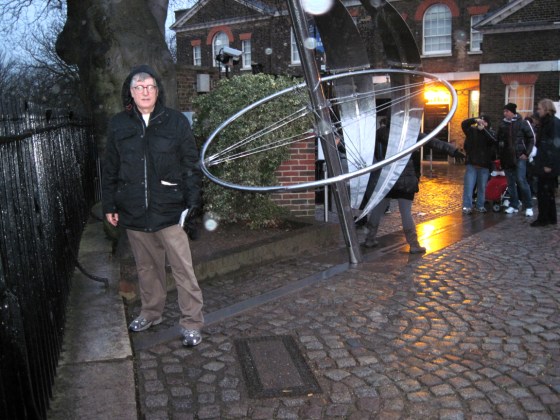 Burl’s mention of Zulu time in connection with my DST rant reminds me of my experience standing at the center of space and time itself at the Royal Observatory in Greenwich last year.

The above picture was taken just after 4 p.m. on New Year’s Day 2011, meaning that the sun had gone down — none of that mucking about with saving daylight that irritates me so in this country. Hence the murky photo. Off to my right you can see the queue of people waiting in the misty rain to take their pictures in front of the astrolabe-looking thing that you see there, and some sort of plaque or sign. I don’t know what it was because I saw no reason to wait in the queue. I just went around to the other side and stood astride the Prime Meridian, precisely at O degrees longitude.

Something struck me about the patient souls waiting on the other side of the big astrolabe was that so many of them were foreign, and I don’t mean European foreign or American foreign like me, but Asians and Africans, and peoples from the subcontinent. It seemed… ironic… that people from places subjugated long ago by the British Empire should come to play tourist at the place where it all started. The development by the Brits of reliable methods for arriving at longitude — carefully documented in the museum within — played a huge role in the way Britannia came to rule the waves. Not only in terms of projecting naval power, but the domination of world trade. And this was where so much of it happened, at the Royal Observatory. Of course, the very notion that this is the 0 point is an imperial conceit. But they’re the ones who figured it out, so that’s what we go by.

Below you see some sextants I saw at the nearby National Maritime Museum — the very instruments used for determining when it is really noon in one’s particular spot on the Earth.

7 thoughts on “Standing astride the centre of the world”