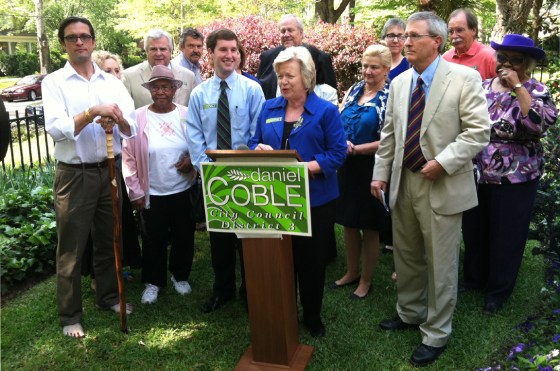 Belinda Gergel is at the lectern, with Daniel Coble to her right. That's Mike Miller in the khaki suit to your right, and behind him to his right is Kathryn Fenner. Steve Morrison is the tall guy in the dark suit at the back, and Walid Hakim is on the viewer's far left, with the walking stick.

OK, so I made it over to Chez Gergel for the announcement previously mentioned. Not much new to report, except to say that this was a major boost for Daniel Coble. If next Tuesday’s voting follows a logical course, he should at least make it into a runoff now.

In addition to the aforementioned big endorsements, Kit Smith was there (with a new grandchild). So was our own Kathryn Fenner, and Walid Hakim, last seen being an unleader of the Occupy Columbia movement. And of course Bud and Julia Ferillo.

There was such a frenzy of endorsing going on that I almost got swept up in it, through no fault of my own. A nice lady wearing a Coble sticker came up to me while I was speaking to Walid, and, gesturing with a camera, said she would need me in a moment. I paused to say “What for?” She said she needed my picture with Daniel. I explained that unlike all the neighborhood folk there, I was not there to endorse Daniel, but to cover the event. I was pretty emphatic about it, since Daniel had just taken out an ad on the blog, and I didn’t want anyone to get confused and think that meant I was on board.

The lady seemed surprised at my words. I found out why a few minutes later. She thought I was Mike Miller. This has happened before, back  in our newsroom days. Yes, I sort of generally look vaguely like Mike, particularly if our hair is cut the same and I’m wearing my wirerims (which you seldom see, although that’s what I was wearing in that Ariail caricature I referred to recently). And Mike had been wearing a khaki suit during the formal announcement, but had taken it off, and I had on a khaki suit coat.

Later in the day, I may post video. Now, to lunch…

45 thoughts on “The Coble endorsements, at the Gergel home”