Well, I’m back. I had some sort of crud yesterday that made me leave the office about this time yesterday– upset stomach, weakness, achiness. It lasted until late last night. When I got up this morning, I was better, but puny. So I went back to bed, and made it to the office just after noon. Much better now.

Anyway, instead of reading newspapers over breakfast at the Capital City Club the way I usually do, I read a few more pages in my current book, 1493: Uncovering the New World Columbus Created, by Charles C. Mann. Remember how I was all in a sweat to read it several months ago after reading an excerpt in The Wall Street Journal? Well, having read the prequel, 1491, I’m finally well into this one.

And I’m reading about how settlement by Europeans in many parts of the New World established “extraction societies.” At least, I think that was the term. (It’s one I’ve seen elsewhere, related to “extraction economy” and, less closely, to “plunder economy.” The book is at home, and Google Books won’t let me see the parts of the book where the term was used. But the point was this: Settlements were established that existed only to extract some commodity from a country — say, sugar in French Guiana. Only a few Europeans dwelt there, driving African slaves in appalling conditions. Profits went to France, and the institutions and infrastructure were never developed, or given a chance to develop.

Neither a strong, growing economy with opportunities for all individuals, nor its attendant phenomenon democracy, can thrive in such a place. (Which is related to something Tom Friedman often writes about, having to do with why the Israelis were lucky that their piece of the Mideast is the only one without oil.)

Here are some excerpts I was able to find on Google Books, to give the general thrust of what I’m talking about: 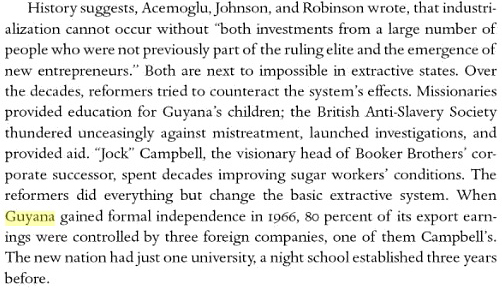 There are degrees of extraction societies, it would seem. South Carolina developed as such a society, but in modified form. There were more slaves than free whites, and only a small number even of the whites could prosper in the economy. But those few established institutions and infrastructure that allowed something better than the Guianas to develop. Still, while we started ahead of the worst extraction societies, and have made great strides since, our state continues to lag by having started so far back in comparison to other states.

It is also inhibited by a lingering attitude among whites of all economic classes, who do not want any of what wealth exists to be used on the kind of infrastructure that would enable people on the bottom rungs to better themselves. This comes up in the debate over properly funding public transit in the economic community of Columbia.

Because public transit doesn’t pay for itself directly, any more than roads do, there is a political reluctance to invest in it, which holds back people on the lower rungs who would like to better themselves — by getting to work as an orderly at a hospital, or to classes at Midlands Tech.

It’s a difficult thing to overcome. Other parts of the country, well out of the malarial zones (you have to read Mann to understand my reference here), have no trouble ponying up for such things. But here, there’s an insistent weight constantly pulling us down into the muck of our past…

6 thoughts on “The infrastructure of a healthy society”