The eagerness of both ends of the political spectrum to demagogue on gasoline prices is a powerful force. But I don’t think I’ve seen anything quite as simplistic as this before: 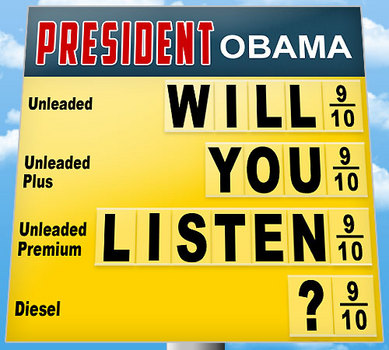 Gas prices are too high, and we need President Obama to listen.

With an 8% gas price spike last month and prices expected to rise further this summer, it’s time to solve our energy problems, provide real energy solutions for the American people, and get our economy focused on creating jobs. The president’s energy policy isn’t helping and begs the question: is the president even listening? We need the entire Keystone XL pipeline built, we need to drill domestically, and we need to stop depending on foreign oil. If we can lower gas prices, we also can grow our economy and create jobs for the American people.

Welcome to my new Rally page – where you can rally behind my pro-jobs, pro-growth campaign. Leave comments, donate, and support the campaign.

Let’s get this economy back on track.

What precisely does that mean — “President Obama: Will you listen?” What are we to suppose the president hasn’t heard? That there’s an uptick in gas prices? Hasn’t the predicted advent of $4-a-gallon gas been done to death over the last couple of weeks — even before it arrives?

And what, pray tell, is it that we’re to assume the president should do about the global market forces and geopolitics that are causing this momentary uptick?

And do you really believe that lower gas prices are in the long-term interests of the United States?

I was momentarily encouraged two weeks ago when I saw this headline on a release from Joe Wilson: “Wilson Supports All-Of-The-Above Energy Bill.” I thought maybe Joe was moving toward an Energy Party stance. But then I saw it was just more pandering about the gasoline prices that he and others are always so eager to exploit.

Yep, people don’t like paying more for gas; it’s true. I don’t. Present gas prices are hard for me to pay already. But I also know that Joe’s right when he says we need to “stop depending on foreign oil,” and that keeping prices low is the OPPOSITE of a policy that would encourage that.

A true, all-of-the-above energy policy would include, among other things:

There was a bill, awhile back, that moved in the right direction. Unfortunately, Lindsey Graham withdrew his support for it when Republicans of Joe Wilson’s ilk persecuted him for the “sin” of working with a Democrat.

A rational policy aimed at energy independence would include elements that Republicans hate, and others that Democrats hate — and would require some general sacrifice. Don’t hold your breath waiting for Joe Wilson to push for anything like that. He’d rather pander to us.

21 thoughts on “Wow. Can you get more simplistic than this?”