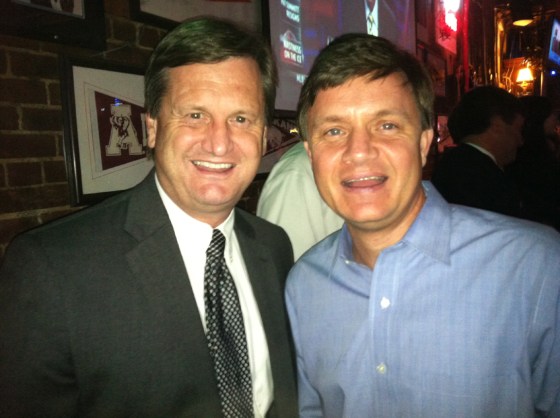 In case you can't tell them apart, that's Republican (hence the white collar) Tom Davis on the left, and Democrat (hence the blue collar) Boyd Summers on the right. I hope the left-right part doesn't confuse you.

Just a quick word about this.

Phil and Wesley shot the 100th show of “Pub Politics” last night, and it was a gala affair. Sponsor Franklin Jones bought free beer and boiled peanuts. All sorts showed up. And despite the small-town clannishness of SC politics, not all of them knew each other.

At one point I was chatting with Sen. Tom Davis, and he remarked, “That guy in the blue shirt over there looks just like me.” It was Boyd Summers, lately chairman of the Richland County Democrats. This matchup of political opposites was too much for me to resist, so I called Boyd over and got the above shot of the “twins.”

Rep. James Smith was there with a new band (as you’ll recall, James was once one of the legendary Root Doctors). And… just all sorts of people, Democratic and Republican.

I was not a scheduled guest on the show, but I didn’t let that stop me. I walked over in the middle of the show, leaned in and held up eight fingers and yelled, “Eight times! I’m the one and only eight-timer!” They were fairly nice about it. 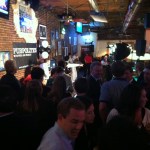 There was a pretty good crowd there for the show. Of course, they were serving free beer. 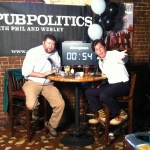 Phil Bailey and Wesley Donehue recognize a face in the crowd, early in the show. 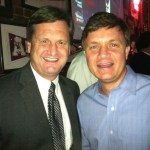 In case you can’t tell them apart, that’s Republican (hence the white collar) Tom Davis on the left, and Democrat (hence the blue collar) Boyd Summer on the right. I hope the left-right part doesn’t confuse you.