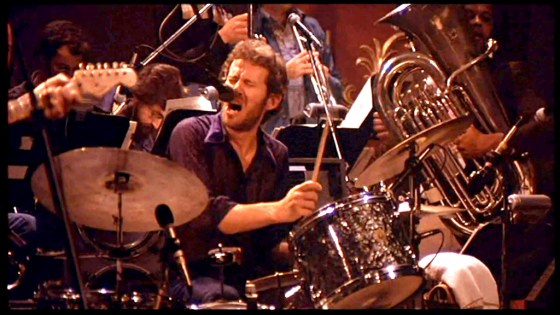 And to channel Lewis Grizzard, I suppose I should say I don’t feel so good myself.

I was sad this morning to read that Levon Helm is in the last stages of cancer. Virgil Caine himself! Not only am I a huge fan of The Band (I saw them live with Bob Dylan in ’74!), but he’s the most awesome, naturalistic actor I’ve ever seen. Remember him as the coal miner himself in “Coal Miner’s Daughter”? You’d have thought they had dragged him right out of the mine, he was so real.

Chuck Yeager: Hey, Ridley… you got any Beeman’s?
Jack Ridley: I might have me a stick.
Yeager: Well loan me some, would ya? I’ll pay ya back later.
Ridley: Fair enough.
Yeager: I think I see a plane over here with my name on it.
Ridley: Now you’re talkin’…

He was also the narrator, because he came closest to having that aw-shucks Yeager quality that the job required:

There was a demon that lived in the air. They said whoever challenged him would die. Their controls would freeze up, their planes would buffet wildly, and they would disintegrate. The demon lived at Mach 1 on the meter, seven hundred and fifty miles an hour, where the air could no longer move out of the way. He lived behind a barrier through which they said no man could ever pass. They called it the sound barrier.

And now, this afternoon, I hear this:

Dick Clark, the music industry maverick, longtime TV host and powerhouse producer who changed the way we listened to pop music with “American Bandstand,” and whose trademark “Rockin’ Eve” became a fixture of New Year’s celebrations, died today at the age of 82.

Clark landed a gig as a DJ at WFIL in Philadelphia in 1952, spinning records for a show he called “Dick Clark’s Caravan of Music.” There he broke into the big time, hosting Bandstand, an afternoon dance show for teenagers…

I first saw “Bandstand” on local TV in Philadelphia. I lived across the river in Woodbury, N.J., in 1960-61, and used to watch all those “big kids” talking about which songs had a good beat and were easy to dance to.

All these years, and he never got old… but time eventually took its toll.