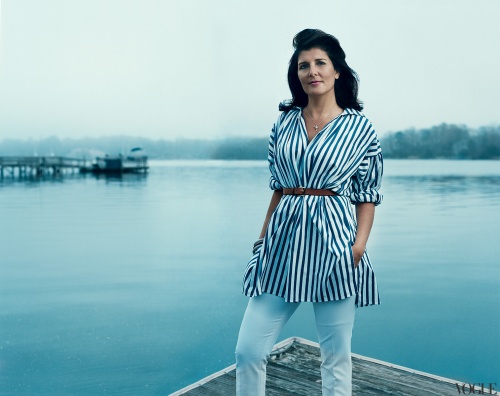 The piece about Nikki Haley in Vogue, like most national media coverage we’ve seen of her, reliably hits all the wrong notes — and hits them hard. One wonders how the piece was typed, since the writer seems to be constantly hugging himself with delight to be in her presence. (A woman! An Indian-American Woman! A young, Indian American Woman, governor of backward South Carolina! Oh, the rapture!) The cognitive vacuum created by the utter lack of perspective and skepticism is deeply disturbing. But we’ve grown accustomed to that.

Some of the more gag-inducing bits:

In other words, she plays Mr. Christopher Cox like a tin whistle.

But bits of clarity do slip in. My favorite:

Indeed. That has long been one of Nikki’s most notable traits. She believes that everything she believes is true, and doesn’t doubt. And as I remember from years past when I would grumpily try to disabuse her of one of those bumper-sticker principles — say, “I want to see government run like a business” — she is impervious to reason, perspective or argument.

If I were like that, my face would be pretty free of lines, too.

As the NYT Magazine noted, “Nikki Haley, the governor of South Carolina, doesn’t care what you think.”

Sometimes, the national media get it just right, in spite of themselves.