I just finished reading Mutiny on the Bounty, for the first time — I think. I initially had this vague idea that I had read it as a child. Yet most of it seemed fresh to me. Of course, I knew at ever step of the way what was to happen next. Who doesn’t know the general outline of the story? Who hasn’t seen at least one of the Hollywood versions? But the actual words seemed fresh as I read them, and certain things about it — such as the fact that, bizarrely, the English sailors refer to the people of Tahiti as “Indians” throughout — seemed totally unfamiliar. 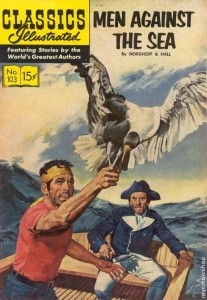 In any case, I’m certain I’ve never read either of the sequels, Men Against the Sea or Pitcairn Island. That is to say, I’ve never read the “chapter book” versions. I have a clear memory of reading the Classics Illustrated version of Men Against the Sea. What sticks out in my mind is the desperate men in the open boat managing to kill a seagull, and Captain Bligh rigidly serving out portions of its blood to the neediest men on board. (Or do I remember Charles Laughton doing that in the 1935 film?)

Anyway, now that I’ve finished the first book, I’m wondering whether it’s worth my while to read the second. I know what happened — Bligh, a tyrant of a captain but an extraordinary seaman, manages to get himself and 17 others safely to Timor, 3,500 miles away, in an open boat with practically no provisions. It stands as one of the most extraordinary feats of seafaring history.

But I’ve got to think it’s not much fun to read. It’s a tale of horrific suffering, day after day. And the main protagonist is a guy who’s hard to like. I mean, Mutiny on the Bounty had gorgeous topless Tahitian girls. (No pictures, but still…) What’s this got to recommend it?

Perhaps the fact that it’s told mainly through the experience of Thomas Ledward, acting surgeon, helps you root for these guys a bit more than you otherwise might. I’m pretty sure I wouldn’t want to read it in Bligh’s voice.

Anyway, has anyone out there read it? Did you like it? And if so, why?

12 thoughts on “Has anyone read “Men Against The Sea”?”