South Carolina Chamber of Commerce President Otis Rawl — who two years ago led his organization to make the unprecedented move of endorsing Vincent Sheheen for governor — today stuck up for Nikki Haley for something virtually no one at the State House will defend her on. 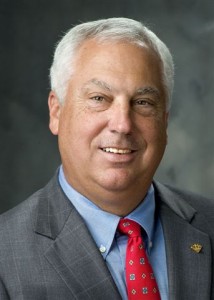 Speaking to the Columbia Rotary Club, he said the DHEC decision allowing Georgia to deepen the way to the port of Savannah was not a game-changer, and not a problem, for South Carolina in the long term.

In saying this, he was partly reflecting the wishes of multistate members who like the idea of competition between ports to keep costs down. But he also said it was a competition that Charleston, and South Carolina, would win.

To start with, he said, the proposed work would only deepen the Georgia port to 48 feet, compared to Charleston’s 52 — and that those four feet made a big difference. Further, he said that if South Carolina makes the right moves (always a huge caveat, but he seemed optimistic) we are well-positioned to become the entry point for the world to the Southeast, and an ever-greater distribution hub. One of the things SC has to get right — opening up the “parking lot” that I-26 has become at key times between Charleston and Columbia.

Otis agreed with me that this stance makes him a lonely guy over at the State House, where both houses almost unanimously rebuked the governor for, as many members would have it, selling out South Carolina to Georgia. Aside from Otis, only Cindi Scoppe has raised questions that challenge that conventional wisdom.

Now, lest you think ol’ Otie has gone soft on the Sanford/Haley wing of the GOP, he went on to say that one of the things business and political leaders must do to help build the SC economy is to refute, challenge and combat the Big Lie that our public schools are among the worst in the country. Because who in the world would want to invest in a state like that?

Not that we’re where we want to be, but as Otie pointed out, on realistic measures of quality, SC is more likely to rank in the low 30s. Which may not be fantastic, but is a far cry from “Thank God for Mississippi.”

On the whole, a fine set of assumption-challenging points from today’s Rotary speaker…