You sort of have to be a member, or former member, of The State‘s editorial board to get what this means to me, but I was excited to see that, in a column in yesterday’s WSJ, Daniel Henninger made repeated references to the concept of subsidiarity.

Subsidiarity is a concept I first ran across, and was intrigued by, in the communitarian classic The Good Society by Robert Bellah, et al.

In the years after I first read about it, I was enough of a bore about the concept in the editorial suite of The State that one April 1st, at the instigation of then-Publisher Ann Caulkins, my colleagues played a truly elaborate April Fool’s prank on me that was entirely based on some supposed new research debunking subsidiarity. It was probably the most esoteric, nerdy prank ever played on anyone in South Carolina history. The sort of thing the geeks on “The Big Bang” might play on each other, only with them it would be about physics instead of political philosophy — some knee-slapper having to do with the Heisenberg Uncertainty Principle, perhaps.

The Bellah book, and other references I have seen since, defined the concept this way: 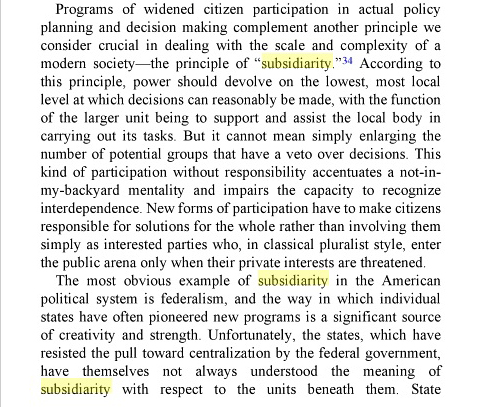 As you can see, the idea is sorta, kinda related to what conservatives in the early 90s used to call “devolution” — the concept of moving governmental functions down to lower, more local levels. And yes, subsidiarity generally demands that. But it can also work the other way when you consider the duty “of the larger unit being to support and assist the local body in carrying out its tasks.” Also, the smallest unit isn’t necessarily the best; you look for the smallest unit “at which decisions might reasonably be made.”

While I haven’t used the word much over the years, if you peruse my work, you’ll see the influence of the concept in, for instance, my constant battles with the Legislative State to let local governments make the decisions that are properly left to the governments closest to the people. (I know of no state in the union more reluctant to allow that than South Carolina.) You also see it in my occasional mentions that the federal government has no business trying to run public schools. But then you see it work the other way, too — I’ve realized that many of the poor, small districts in South Carolina are unable to govern themselves effectively, and have a need for the state to “support and assist” them (by, for starters, consolidating many of them).

Anyway, so I was at first pleased to see Henninger mention “subsidiarity” — not once, but three times! But as I read the way he and Paul Ryan defined it, I grew confused:

Subsidiarity—an awful but important word—attempts to discover where the limits lie in the demands a state can make on its people. Identifying that limit was at the center of the Supreme Court’s mandate arguments.

Huh? I hadn’t run across that before. It’s a concept I’ve certainly encountered thousands of times in the WSJ, but I’d never heard it called “subsidiarity.”

But he’s not completely out of line. Sure enough, the Wikipedia entry on the Catholic social teaching (forgive me for citing such a plebeian source, but I’m too tired on a Friday evening to go poring through papal encyclicals) does mention this:

The principle of subsidiarity was developed by German theologian Oswald von Nell-Breuning.[2] His work influenced the social teaching of Pope Pius XI in Quadragesimo Anno and holds that government should undertake only those initiatives which exceed the capacity of individuals or private groups acting independently.

Of course, it does so after citing the more general definition that I have always understood:

Subsidiarity is an organizing principle that matters ought to be handled by the smallest, lowest or least centralized competent authority. Political decisions should be taken at a local level if possible, rather than by a central authority. [1] The Oxford English Dictionary defines subsidiarity as the idea that a central authority should have a subsidiary function, performing only those tasks which cannot be performed effectively at a more immediate or local level.

So forgive me if I continue to believe that the concept is about the proper relationships between the biggest entity for making societal decisions (the federal government, the United Nations) and the smaller units (municipal government, neighborhood associations, the family — and taken to an extreme, the individual, although it seems to me that any concept of social structures sort of needs two or more to be present), and not yet another way of speaking of the monotonous, never-ending political battle between public and private, which is a different sort of dynamic altogether.

When, I wondered, did emphasis on the word’s meaning shift from the idea that things should be handled on the most local competent level, and become a servant of the libertarian concept of freeing the individual from the supposed “tyranny” of government, a mere matter of asserting the superiority of private over public?

Again, Wikipedia helps me out:

Subsidiarity is also a tenet of some forms of conservative or libertarian thought. For example, conservative author Reid Buckley writes:

Will the American people never learn that, as a principle, to expect swift response and efficiency from government is fatuous? Will we never heed the principle of subsidiarity (in which our fathers were bred), namely that no public agency should do what a private agency can do better, and that no higher-level public agency should attempt to do what a lower-level agency can do better – that to the degree the principle of subsidiarity is violated, first local government, the state government, and then federal government wax in inefficiency? Moreover, the more powers that are invested in government, and the more powers that are wielded by government, the less well does government discharge its primary responsibilities, which are (1) defense of the commonwealth, (2) protection of the rights of citizens, and (3) support of just order.[2]

Aha! Suddenly, I realize that the editorial board of The State was not the only entity in South Carolina given to pulling pranks regarding the concept of subsidiarity. Reid Buckley runs The Buckley School of Public Speaking right up the road in Camden.

So…  I see the libertarian ideologues have gone to messing with my pet concept, emphasizing one small consideration at the expense of the larger, more constructive idea, in their never-ending battle against the notion that we might ever dare to work together as a society to address concerns that are legitimately public.

Oh, well. At least I got to read the word in a general-circulation newspaper.

18 thoughts on “(Sort of) thrilled to see ‘subsidiarity’ mentioned”