Note how self-restrained I am. I held myself back from using as my headline, “I got your ‘member’ right here!” Even though that would have better expressed my exasperation. 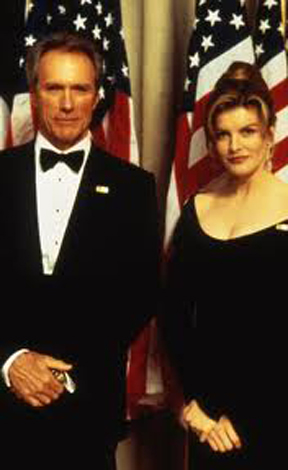 Clint Eastwood and Rene Russo as Secret Service 'members' in 'In the Line of Fire.'

We used to have “servicemen” in our armed forces. Or, more broadly, military personnel. Now, we have this horrendous construction that drives me nuts every time I hear it: “military members.” That’s the best we seem to be able to come up with as a way of referring generically to soldiers, sailors, marines, and that least ideologically correct of all designations, airmen.

What are we saying? That the military is a club? Like belonging to Rotary, or the Elks? To me, it sounds vaguely insulting to those who serve us in uniform, to refer to them as “members.” Like fingers or toes, or perhaps some even less presentable member.

With the scandal over the weekend involving both Secret Service and military personnel, this linguistic absurdity has been taken to new depths.

To begin with, one assumes that all the agents sent home for consorting with prostitutes were male. And if you read non-American news sources such as Agence France-Presse or the Daily Mail, they go ahead and refer to them as male. That’s because in those countries, the fact that men tend to do certain things that women tend not to do (such as, bring hookers to their rooms) is confronted somewhat more directly, and not treated like a secret of which we must not speak. (Someone is inevitably going  to contradict me by pointing to U.S. sources that do mention gender. But the fact remains that, after having read U.S. sources that did not mention gender, the first ones I found that did were foreign. It’s a tendency thing, not an absolute rule.)

I haven’t yet found any stories that tell the gender of the five “military personnel” who were also implicated, but not sent home, supposedly because their skills were too much in demand in protecting the president (rooftop snipers, perhaps?). If anyone has seen such a reference, please share it, if only to satisfy my morbid curiosity.

But whether they are male or (against the odds) female, there are better ways to refer to them than as “military service members,” as the NYT does here in its own stilted fashion:

Five United States military service members who were working with the Secret Service and staying in the same hotel are also facing an investigation because they violated a curfew and may have participated in the misconduct.

The use of such a slightly off-sounding construction has a bad effect on journalists. They become jaded to awkwardness, and therefore their radar doesn’t go off when they inadvertently type something that is not just awkward, but downright nonsensical:

Mr. Obama’s comments came several hours after Representative Darrell Issa, Republican of California and chairman of the House Oversight and Government Reform Committee, suggested that more Secret Service personnel members may have been involved in the incident.

Why not take it to another level, or two? Why not “Secret Service personnel members people employees,” while you’re at it?

Or… and excuse me for getting radical here… how about if the reporter covering this for you just went ahead and asked the question, “Are any of these people female?” Because if not, you don’t have to perform any of these acrobatics, and can just go ahead and refer to the “men.” And if they are, even an awkward construction like “servicemen and -women” would be less jarring than referring to them as “personnel members.”

Or how about just scraping your fingernails on a blackboard? That would probably get on my nerves less…

20 thoughts on “Were any of these “members” female?”