“Hopefully it’ll be a fair and impartial review of facts and the testimony of witnesses so that we can determine, better determine, and be informed about the allegations against the Governor,” said Kershaw County Rep. Laurie Funderburk, a Democrat.  Hers was the only vote against the initial vote to dismiss the complaint against Haley.

The committee’s decision came after a meeting late Wednesday in which Haley’s lawyer argued that the case shouldn’t be revisited.

Earlier this month, the same committee voted to dismiss all charges against the first-term governor. At issue is her time as a fundraiser for Lexington Medical Center and as a consultant for Wilbur Smith Associates, a consulting firm.

I wish I’d been there to hear the discussion, but I couldn’t get away at that time this evening.

What I would have wanted to hear would have been an explanation of why every Republican on the panel voted to end the investigation so recently — earlier this very month — but has now voted to reopen.

Suddenly, the case has merit, it seems.

Let me say that again another way: Within the same month, every single GOP member of the committee has changed his or her mind from “no” to “yes.” One doesn’t know whether to say “Thanks be for miracles” or “Hey, wait a minute…” Here’s a thought: Do both.

What caused this? Could it be as simple as “there were some feelings out there that more investigation needed to be done,” as chairman Roland Smith put it? In other words, that the people of South Carolina sort of collectively said “B.S.” to the vote to dismiss the charges?

Or was it meddling by the mean ol’ speaker? Nope. I saw Bobby today and asked him why he keeps picking on poor Nikki. “I’m not,” he said. So there you have it.

Are you worried that the gov will be distracted by this from the sterling job she’s doing for us, the trembling masses who elected her? Fear not:

“It’s a shame that South Carolina’s political system is once again failing the people and that politics are trumping the law. The governor will do what she has done time and again throughout this process, before and after the claims were dismissed: be open and honest about her work as a legislator, and stay focused on the things that matter to South Carolinians – getting our economy moving and reforming the backwards, good old boy system of government that so clearly thrives in Columbia,” said Haley’s spokesman Rob Godfrey after the decison.[sic]

I’m sure that makes you feel better. Reading back over that statement, I’m reminded of something we used to say long ago when we were on the old mainframe system in The State‘s newsroom: “I think he’s got that on a SAVE/GET key.” If you don’t understand, that’s OK: It’s technical… 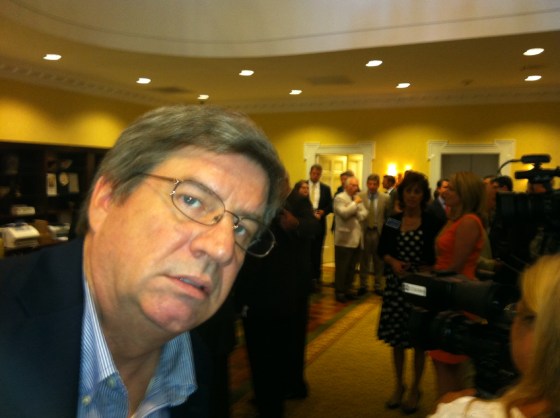 So I was at this presser at midday today, at which Lindsey Graham and Joe Wilson and Steve Benjamin and others had gathered to defend the Pentagon’s budget (more on that when I’ve had a chance to write it) and I was aiming my iPhone around doing what I always do at news events these days — looking for interesting, extremely horizontal images that I could use as a new header image. And as you see at the top of this page, I succeeded. At least, it’s extremely horizontal.

At which point Jeff Wilkinson, who still has a job writing for The State, stuck his face in to say, “What are you doing?”

Which, I want you to attest, is not the same as saying, “You do not have my permission to use that on your blog.”

And I’m a literal kind of guy.

I’m trying to be very careful with this sort of thing. I don’t want to get into the kind of trouble my fellow blogger is in.

Sorry about the focus, Jeff. But I wasn’t aiming at you…

Once when I was the news editor in Wichita, Dave Barry came to visit. Since he was Knight Ridder’s biggest star, an opportunity was set up for him to meet and bat the breeze with some folks from the newsroom.

It was a light, banter-filled session. At one point, newsroom comedian Dennis Boone challenged Dave by asking, with mock indignation, why he and the rest of us, who worked for the same company, had to sweat away at hard work for long hours while Dave got paid to crack jokes. Barry smiled a satisfied smile and answered with one word: “Talent.”

I had a question I wanted to ask, too, but it felt out of place. It’s one I’ve thought of a lot over the years with regard to humor. It would have gone like this: “Do you ever feel guilty about cracking jokes to a mass audience? Do you ever wonder, when you make a real killer joke about, say, cancer, how many people reading it just lost a loved one to cancer, thereby making your bon mot like a knife to the heart?”

But I decided the question was too dark for the venue — downright weird, really — so I didn’t ask it that day. Nor did I when I ran into Dave again in Atlanta in 1988, where he and I were both covering the Democratic National Convention. We were in the makeshift KR work area in the World Trade Center, and he was telling me about some practical joke that he and others were pulling on Mike Royko over in the next press encampment (I forget what form the gag took). Again, not the right time.

I like a joke as much as the next guy, and probably more than most. I’m generally the guy most likely to go off on a facetious digression in a serious meeting, if only to keep myself interested. I’m guilty of a great deal of the kind of gallows humor that people in newsrooms use to distance themselves from the unpleasantness they report on. (I have my limits, though. I’ve never participated, for instance, in a death pool.) And sometimes I’d forget myself and act that way outside the newsroom. Early in my career, when I’d hardly had time to be jaded (the youngest, least-experienced journalists are often the worst, anxious to show how hardened they are), I was playing tennis one evening with another guy while my wife watched us. There was suddenly a loud, horrible screeching sound followed by a tremendous crash on the nearby busy street that was just out of sight. I said with a grin, “Let’s play that point over; that noise distracted me.” My wife was horrified, and when she pointed out that someone may have just been killed, I felt the appropriate regret, or at least I like to think so. But I knew that we said things that cold all the time at work, about all sorts of human tragedies. We might even dignify it by relating it to professional detachment.

Over time, that sort of humor became less and less the special province of journalists, cops and others who dealt routinely with the uglier sides of life. Starting about the time that “Saturday Night Live” started its long run, society as a whole started accepting an ironic approach to terrible things. A landmark might have been Dan Akroyd’s hilarious sketch in which Julia Child is bleeding to death from a wound inflicted while preparing a meal. Over the years we devolved from that down to laughing at “South Park” and “Family Guy.” We got hipper and hipper and more and more ironic.

Now, with the Web, the lines between professional and audience are largely erased, and everyone competes to be the biggest wiseacre on the Twitter feed. But I was struck today by a gag among professionals that I felt crossed the line — to the extent that there still is a line:

To interpret for those not familiar with the Twitter syntax, @TheFix (the feed of the blog written by Chris Cillizza of The Washington Post) said “Man who handles poisonous snakes dies from….wait for it…a poisonous snake bite.” He also provided the link to this story, “Serpent-handling pastor profiled earlier in Washington Post dies from rattlesnake bite.” Then, Celeste Headlee, the co-host of The Takeaway, which I regularly enjoy on public radio), added “Was he on a plane?”

Keeping the ball rolling, Steve Skinner — him I don’t know — added “….and was Samuel Jackson on said plane?” (Such overexplication is, of course, a joke-killer, but hey, nobody’s perfect.)

At this point I decided to play wet blanket — the Harry Hairshirt, the Captain Buzzkill, the Church Lady — and replied:

This was a human being who suffered an untimely and painful death, folks.

No one answered, and that was merciful of them. I had committed such a gaffe, slathering on the self-righteousness like that.

But come on, people.

By the way, if you read the story at the link, it’s appropriately and sensitively done. After all, it’s written by someone who actually got to know the victim in the course of profiling him. That’s an interesting thing about journalistic facetiousness — the reporter out in the field who gets to know sources as human beings is almost never as cynical as the desk types who never leave the newsroom. To the reporter, this wasn’t just some redneck yahoo who took his Bible too literally — which these days is a stock character tout le monde is encouraged to laugh at. He’s a human being who believed in something, rightly or wrongly, and died for it.

Died horribly, in case you don’t know anything about snakebite (and if you don’t, the story sets you straight).

Yeah, I know I was acting like a prig, and that’s no way to get followers on Twitter. But there it is.

Normally, I view additional government spending with a healthy dose of skepticism. However, even as someone who extols the virtues of fiscal restraint, I can absolutely say that we need more judges here in South Carolina.

This has been long overdue. South Carolina has the fewest number of judges per population and more than twice the national average of case filings per judge. Each year, Justice Toal tells the legislature these facts in her State of the Judiciary Report.
As a practicing lawyer here in South Carolina, I can tell you that wait times for hearings are longer than they need to be. I do a fair amount of family court work, and I do it throughout the state. Some counties run a tight ship, and others are an absolute nightmare.
In a certain county, in family court, just to get a hearing scheduled, not heard, can take up to six months. That’s insane. I know the wheels of justice are slow, but six months to get a hearing scheduled means the wheels of justice have fallen off. If you want to get the dockets moving, you have to have more people available to get the cases disposed of. Alternative dispute resolution (mediation) has taken some pressure off the court, but you cannot force people to agree. Sometimes, especially in family court, you have to have an adjudication…

I give him joy of those new judges. They were needed. It’s good to see at least one of the neglected areas of state governmental responsibility get at least some of the resources it needs.