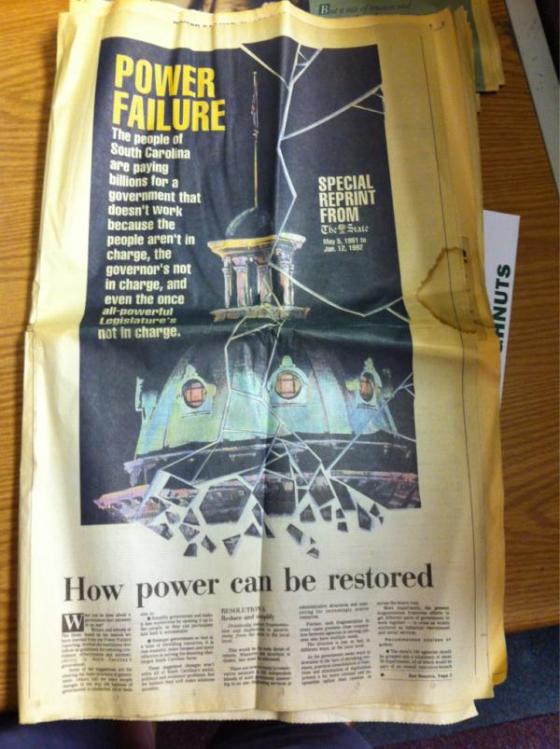 Adam Beam of The State Tweeted this over the weekend:

Adam must have been spending Saturday at the office going through old drawers in the newsroom. There are a number of these scattered about here and there.

This is the special reprint we did early in 1992 of the Power Failure series that I had spent most of the previous year directing.

Power Failure was something I dreamed up in 1990. As governmental affairs editor that summer, I had been going nuts keeping up with an unbelievable string of scandals in and around state government, the most memorable of which was the Lost Trust investigation, which led to indictments against a tenth of the Legislature.

In the midst of it all, then-executive editor Gil Thelen stopped by my desk one day to wonder, What could we do to give our readers a positive way to respond? What could be done to make state government better, rather than just wallowing in the bad news day after day?

The answer I came up with was a project highlighting all of the deep, structural flaws in South Carolina’s system of government — flaws that set South Carolina apart from every other state. Flaws that made our system particularly resistant to change.

These flaws are difficult to summarize briefly, but all of the problems — the weak executive, weak local governments, centralization of authority, fragmentation of that central authority, almost complete lack of accountability (in terms of anyone being able to hire and fire key officials), and on and on — were vestiges of a constitutional system originally designed to put all authority in the hands of the landed, slaveholding antebellum gentry, and to fragment that power across that whole class of people, so that no one person could make important decisions. For instance, not only did departments that in other states reported to the governor (an official elected by all of the state’s people) report to a separately elected official, or to a board or commission appointed by the Legislature, but even decades after the passage of Home Rule, lawmakers still retained a surprising degree of control over local government services.

As I said, it’s difficult to summarize briefly, although we tried with the tagline, “The Government that Answers to No One.” To explain it, I conceived of a 17-installment series, each installment filling several full pages of newsprint (back in the day when pages were much bigger than they are now), totaling well over 100 articles. Gil and Paula Ellis, then the managing editor, essentially laid the resources of the newsroom at my disposal for most of 1991. Reporters came and went from the project, depending on which subject area we were dealing with at the time.

Were there results? Yes, but nowhere near what we were seeking. A partial restructuring of state government in 1993 put about a third of the executive branch under the governor. That third of a loaf, though, was great success when you consider that huge areas that were just as important — Home Rule, education governance, reducing the number of statewide elected officials — were pretty much ignored.

As for me — I was ruined as a governmental affairs editor, since the project was an unprecedented sort of news/editorial hybrid — for instance, I had written opinion columns advocating all of these changes throughout the series. I spent a couple of years supervising this or that non-political team (although I retained control of the Washington Bureau) until I made the move to editorial at the start of 1994 — where I spent the next 15 years continuing to advocate these reforms. Most of the items I listed in my last column for The State, “South Carolina’s unfinished business,” was to a great extent a recap of Power Failure.

Recently, we saw one tiny piece of the reform picture fall into place, with the legislation putting the governor and lieutenant governor on the same ticket advancing. Hoorah for small victories.

It’s been frustrating, but hey, this system had been in place in one form or another for 300 years — and the one great characteristic that it possessed all that time was a profound resistance to change. That is still the hallmark of government in South Carolina.

20 thoughts on “Adam uncovers a blast from the past”