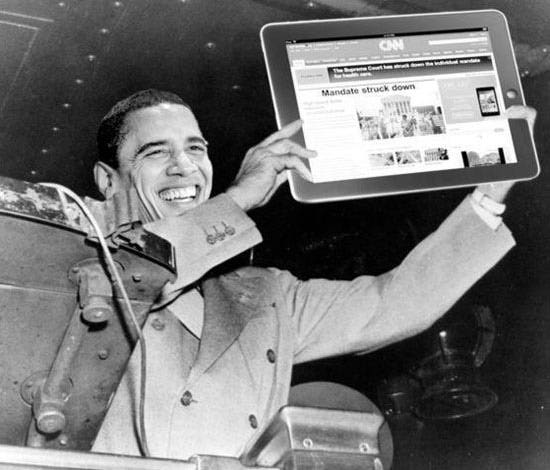 Bud brought our attention to this on an earlier comment:

Everyone knows the famous photo of the Chicago Tribune’s front page declaring, in error, “Dewey Defeats Truman” in 1948. (The newspaper fell victim to its early deadlines and made a guess at the presidential election result at press time, damning itself to history.)

CNN’s erroneous report this morning that the U.S. Supreme Court had struck down President Obama’s healthcare reform — live on air for 7 minutes, with a lower-third caption — has spawned its own “Dewey Defeats Truman,” courtesy of Gary He, a product director at Insider Images (and Photoshop,of course)…

I thought I’d just make it easier for y’all to see.

So that you might fully savor the visual reference, here’s a link to the original.

Actually, there were a number of originals shot from slightly different angles, and/or split-seconds apart.

Of course, this iconic image has been spoofed before…