Couldn’t help responding to Jim DeMint today when he Tweeted,

My response was in two parts. First, I answered his question: Yes!

I had read with interest the top story in The Wall Street Journal this morning, which said that the long logjam on national legislation to require online businesses to pay sales taxes just like their bricks-and-mortar competitors may finally have broken:

Republican governors, eager for new revenue to ease budget strains, are dropping their longtime opposition to imposing sales taxes on online purchases, a significant political shift that could soon bring an end to tax-free sales on the Internet.

Conservative governors, joining their Democratic counterparts, have been making deals with online retail giant Amazon.com AMZN -1.09% to collect state sales taxes. The movement picked up an important ally when New Jersey Gov. Chris Christie—widely mentioned as a potential vice-presidential candidate—recently reached an agreement under which Amazon would collect sales taxes on his state’s online purchases in exchange for locating distribution facilities there.

This should lead to quick resolution, in a rational universe, since Amazon has said they support a national solution. And that’s very good news for states like South Carolina, which have unwisely shifted so much of their tax burdens to sales taxes just as conventional, “analog” store sales have been drying up.

I was particularly interested because the change that had come about was that Republican governors, such as Chris Christie, saw the need to do something about the fact that their states’ coffers had been depleted by the shift of our economy to online shopping.

It caused me to wonder what it would be like to have a real conservative Republican governor, rather than a darling of the Tea Party or the Club for Growth, one who — like any real conservative — believes in responsible governance, one who sees his or her role as a steward of the state’s public sector.

And then I remembered, that I did experience that, for years, when Lamar Alexander was governor in Tennessee. And so it is fitting that Lamar is the senator pushing this legislation:

Seizing on the recent political shift, Sen. Lamar Alexander, a Tennessee Republican, and co-sponsors from both parties are attempting to speed up action on a bill they wrote to give states authority to compel online companies to collect sales taxes.

One of the co-sponsors, Sen. Dick Durbin (D., Ill.,) said, “It gets down to a basic issue…of simple fairness for small businesses that create jobs and opportunities all across America. And with the sales taxes they collect, they provide for local police and firemen, for the sewers and streets.”…

Oh, but wait… as soon as I said, Yes!, I realized that Sen. DeMint’s question was purely rhetorical, meant only to set up his announcement that he’s leaping into the fray to fight against common sense.

You can always rely on Jim DeMint. Unfortunately.

Silly me, for thinking Jim DeMint cared what I thought. 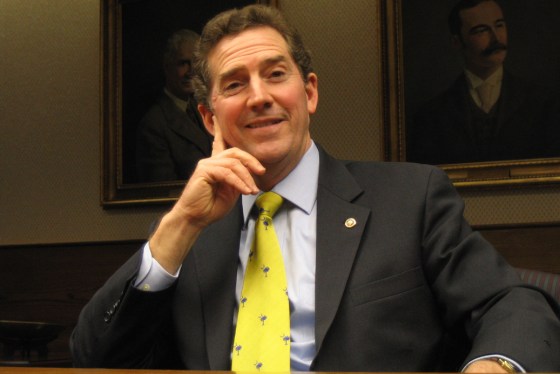 What, Me Worry about what YOU think?/File photo from an editorial board meeting in 2007.

17 thoughts on “Silly me, for thinking DeMint cared what I thought”