During the discussion on a previous post, I noted that “I have been known, on one or two occasions, to allow a source space for a full op-ed piece, even when the piece is almost 100 percent nonsense… and run a piece of my own, right across from it, demolishing it. That way the reader/voter has a chance to see that party’s full case, as well as the arguments against it.”

Bud, quite reasonably, asked, “An example would be good. Sometimes people think they demolish something but it turns out not to be the case. Let the bloggers be the judge.”

Fine. Except I could only think of a couple of cases (as I said, there were “one or two”), but I couldn’t immediately lay my hands on either one of them.

I’ve now located one of my examples. It’s not a perfect one. In this case, for instance, I didn’t rebut the op-ed piece until days later — either because I didn’t have column space until then, or because something that happened later in the week got my dander up, and caused me to recall the previous piece. I don’t know; it’s been almost five years now.

South Carolina can only have an orderly, predictable and consistent growth rate in state spending by constitutionally mandating it. It cannot be accomplished on a reliable basis by hanging onto slim majorities in the Legislature and having the right governor. The political pressures are too great unless there is a constitutional bridle on the process. 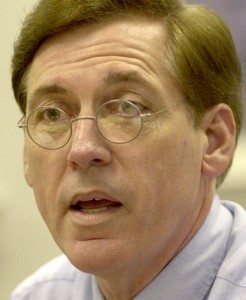 That is the reason I created a task force to consider a constitutional amendment that would cap the growth in spending by the state. The first meeting of the Senate study committee on constitutionally capping state government spending is scheduled for 1 p.m. Wednesday in Room 105 of the Gressette Senate office building in Columbia.

There will always be more needs than revenue no matter what the economic times and the amount of available new funds. Government must, therefore, temper its conduct to spend so that over the highs and lows in revenue forecasts, the necessary revenue will be there to fund essential needs without the pressure for new taxes.

When government is flush with money, the spending goes up to fund many new initiatives — some good, some questionable and some not good. In other words, projects get funded not so much out of merit but merely because the money was available. Some one-time expenditures also occur the same way. In the face of a bountiful taxpayer buffet, government cannot control its appetite, so its stomach must be stapled.

At stake is the need to at least control the rate of growth in the recurring base. So I have introduced a constitutional amendment to cap the rate of spending of our state government. Government would be limited to growth at an amount that would not exceed the rate of population growth plus the growth in personal income. Basically, government should not grow any bigger than it needs to be or any faster than people’s ability to pay for it.

I have been an ardent supporter of both Barry Goldwater and Ronald Reagan, and I believe that government is best which governs least. I also believe that as much money as possible is best left in the hands of people if we are to economically advance. If people keep more, they have greater opportunities to invest and spend so our economy will expand. It is a matter of fairness.

If there are surpluses in Columbia, these should not expand the obligation to fund a growing government but instead should be used to reduce long-term debt and obligations, fund capital projects to avoid issuing costly bonds, cover one-time costs, save and carry forward for a rainy day, and/or fund tax refunds and tax cuts.

The constitutional amendment would foster growth in the private sector, challenge legislators to prioritize spending better, seek better efficiencies in the operation of government and privatize operations where it is in the state’s best interest. This will present new opportunities to create rainy-day funds, to create a more debt-free South Carolina and to replenish trust funds that too often have been tapped in lean times to fuel the insatiable appetite of government created by overspending in good times.

Finally, we all must realize that our state government, just as much as any business, has to be competitive in order to attract and retain jobs. We need to provide essential services, but we need to do it in a way that ensures excellence, efficiency and long-term cost control. Throwing dollars at an agency does not ensure that it will be better. Limiting the growth in spending ensures that the challenge for each budgeting year is to do more with what we have available rather than to spend more to get the job done.

Mr. McConnell, a Charleston attorney and businessman, is president pro tempore of the Senate and chairs the Senate Judiciary Committee.

As I said, that ran on Friday, so I’m beginning to see what probably happened. I generally wrote my Sunday columns on Fridays. I would have read the senator’s piece — most likely for the first time — on the page proof Thursday afternoon, so it would have been quite fresh in my mind. I might have even ripped out a few grafs of my response right then, and polished them somewhat the next morning.

You’ll note, though, that my column wasn’t just a response to McConnell. I didn’t even get to him until about halfway through. This column was of a certain type, the type that puts me in mind of a line Mark Twain wrote: “And now that my temper is up, I may as well go on and abuse every body I can think of.” I always liked that line because it describes a mood that is very familiar to me.

Here’s my column that ran on Sunday, Oct. 21, 2007:
IN SOUTH CAROLINA, WE KEEP TALKING ABOUT THE WRONG THINGS

We always seem to be having the wrong conversations in South Carolina. Sometimes, we don’t even talk at all about the things that cry out for focused, urgent debate.

Look at this joke of a commission that was assigned to examine whether the city of Columbia should ditch its ineffective, unaccountable, “don’t ask me” form of government. It was supposed to report something two years ago. And here we are, still waiting, with a city that can’t even close its books at the end of the year. Whether its that fiscal fiasco, or the failure to justify what it did with millions in special tax revenues, or the rehiring of a cop who was said to be found drunk, naked and armed in public, there is no one who works directly for the voters who has control over those things.

But as bad as it is to have no one to blame, there is no one to look to for a vision of positive action. A city that says it wants to leap forward into the knowledge economy with Innovista really, really needs somebody accountable driving the process.

Columbia needed a strong-mayor form of government yesterday, and what have we done? Sat around two years waiting for a panel that didn’t want to reach that conclusion to start with to come back and tell us so.

It’s worse on the state level.

What does South Carolina need? It needs to get up and off its duff and start catching up with the rest of the country. There are many elements involved in doing that, but one that everybody knows must be included is bringing up the level of educational achievement throughout our population.

There are all sorts of obvious reforms that should be enacted immediately to improve our public schools. Just to name one that no one can mount a credible argument against, and which the Legislature could enact at any time it chooses, we need to eliminate waste and channel expertise by drastically reducing the number of school districts in the state.

So each time the Legislature meets, it debates how to get that done, right? No way. For the last several years, every time any suggestion of any kind for improving our public schools has come up, the General Assembly has been paralyzed by a minority of lawmakers who say no, instead of fixing the public schools, let’s take funding away from them and give it to private schools — you know, the only kind of schools that we can’t possibly hold accountable.

As long as we’re talking about money, take a look at what the most powerful man in the Legislature, Sen. Glenn McConnell, had to say on our op-ed page Friday (to read the full piece, follow the link at the end of this column):

South Carolina can only have an orderly, predictable and consistent growth rate in state spending by constitutionally mandating it. It cannot be accomplished on a reliable basis by hanging onto slim majorities in the Legislature and having the right governor. The political pressures are too great unless there is a constitutional bridle on the process.

The people of South Carolina elect 170 people to the Legislature. In this most legislative of states, those 170 people have complete power to do whatever they want with regard to taxing and spending, with one caveat — they are already prevented by the constitution from spending more than they take in.

But they could raise taxes, right? Only in theory. The State House is filled with people who’d rather be poked in the eye with a sharp stick than ever raise our taxes, whether it would be a good idea to do so or not.

All of this is true, and of all those 170 people, there is no one with more power to affect the general course of legislation than Glenn McConnell.

And yet he tells us that it’s impossible for him and his colleagues to prevent spending from getting out of hand.

What’s he saying here? He’s saying that he’s afraid that the people of South Carolina may someday elect a majority of legislators who think they need to spend more than Glenn McConnell thinks we ought to spend. Therefore, we should take away the Legislature’s power to make that most fundamental of legislative decisions. We should rig the rules so that spending never exceeds an amount that he and those who agree with him prefer, even if most South Carolinians (and that, by the way, is what “political pressures” means — the will of the voters) disagree.

Is there a problem with how the Legislature spends our money? You betcha. We don’t spend nearly enough on state troopers, prisons, roads or mental health services. And we spend too much on festivals and museums and various other sorts of folderol that help lawmakers get re-elected, but do little for the state overall.

So let’s talk about that. Let’s have a conversation about the fact that South Carolinians aren’t as safe or healthy or well-educated as folks in other parts of the country because lawmakers choose to spend on the wrong things.

But that’s not the kind of conversation we have at our State House. Instead, the people with the bulliest pulpits, from the governor to the most powerful man in the Senate, want most of all to make sure lawmakers spend less than they otherwise might, whether they spend wisely or not.

The McConnell proposal would make sure that approach always wins all future arguments.

For Sen. McConnell, this thing we call representative democracy is just a little too risky. Elections might produce people who disagree with him. And he’s just not willing to put up with that.

As you can see, that was a very South Carolina column. Everything addressed in it, everything that was getting my temper up, was something that one could just as well be said today. Because in South Carolina, very little that ought to change ever changes.

6 thoughts on “An example of an op-ed rebuttal: Answering Glenn McConnell in 2007”