Someone speculated earlier that Nikki Haley doesn’t maintain her Facebook page herself. I suspect that she does. Or at least that some of the posts, or status updates, or whatever you want to call them (I’m a Twitter man, and get impatient with Facebook) are written by her personally.

They are so emotional. And they are so carelessly written that I hate to think anyone was paid to produce them — unless the rough edges are part of the service being provided, to add authenticity.

For instance, there’s this: 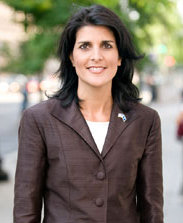 First, one wonders what she’s on about. I didn’t see anything in the paper about her daughter before this appears. That sort of airing of a background battle as though everyone knows what’s going on is so off, so unprofessional, that it really feels like it’s coming from her.

Also, it follows her pattern of embarrassing her appointees by enlisting them in her personal political battles. I feel for Mark Keel.

It’s probably a reference to this thing Will Folks wrote about. I suppose The State was working on the story (the MSM have this quaint habit of confirming things with on-the-record sources, which makes them lag the blogosphere), and that freaked Nikki out in a way that Will’s post did not.

There was an earlier post on the same subject that was more emotional, and blasted The State as a worthless, “biased” entity that was persecuting Nikki’s family, and that one really felt like her. Here it is:

Scrutiny of me comes with the territory of being governor. I expect it. But it’s a sad day for journalism in South Carolina when The State newspaper goes after my 14 year old daughter. Public officials have a right to expect that their minor children are off limits from political opponents and even from biased media outlets like The State. Its disgusting. Shame on them.

If a paid staffer wrote that for her, then I’m embarrassed for that person, too.

71 thoughts on “Does Nikki maintain her Facebook page herself? I suspect so…”