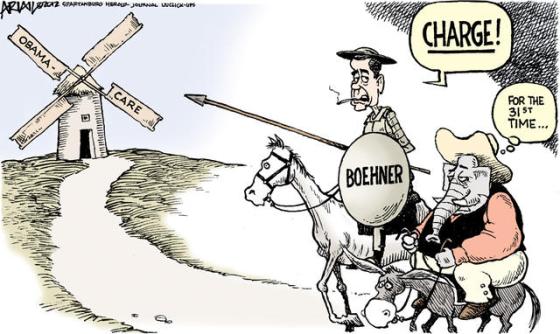 Believe it or not, long after she gave up her bid for the presidency (shudder!), Michele Bachmann continues to write to me quite often, asking for money. Here’s today’s excuse:

Today, the House of Representatives will take the first step towards Obamacare’s ultimate demise by voting to repeal it on the House floor.

Today’s vote is an important symbol for our party’s resolve against Obamacare — but with a Democrat-controlled Senate and President who is still in office, it remains just that: a symbol. To really start the work of dismantling President Obama’s disastrous expansion of big government, we must take back the Senate, keep the House, and defeat President Obama in November’s elections.

That’s why I’m asking you to help show the Democrats and the media that we’re ready to take back our government by making a contribution towards victory over Barack Obama’s agenda.

Will you donate $20.12 today to make a statement that 2012 will be the year we take our country back?

Winning in November will not be easy. As the leader in Congress against Obamacare since its introduction, Democrats have already targeted me and if the past is a predictor, they will spend millions to defeat me. They’ve nominated a self-funded, union-backed liberal to oppose me, and my multi-millionaire opponent has already poured in over $100,000 of his own money to defeat me.

Today’s repeal vote is sure to remind them of what they stand to lose when we win. As election day gets closer, the attacks will surely get stronger, but I won’t back down – as long as I can continue to count on you on my side!

You can bet I will be on the House floor fighting in full force for repeal of Obamacare – but I also want to give you an opportunity to fight back by making a special donation of $20.12 today.

Will you help me advance my record of leadership of fighting against Obamacare today by making a special contribution?

To repeal Obamacare we have a lot of work ahead of us. There are less than 120 days until election day, and I’ll spend each of them working from dawn until dusk to put us on the best possible footing to repeal Obamacare and implement our conservative agenda next January.

The future of our nation deserves no less than our full efforts. We don’t have much time, but together we can take our nation back. I hope to have your continued support.

Sorry, Michele. Promising me more of this same nonsense if I’ll support your team isn’t the way to get me interested.

I’m slightly more charmed by this appeal today from the Democrats:

Today, House Republicans will vote to repeal President Obama’s health care reform—for the 31st time. To commemorate this landmark event we’re giving away free stickers, because c’mon. It’s Constitutional: Get Over It.

First, forward this message to five friends. Then, click here and we’ll send you a free sticker (pictured below).

If you can’t believe House Republicans went to the trouble of 31 meaningless votes, then click here to celebrate this historic waste of time.

P.S. Remember to forward this message to five people! Then click here to get this sticker!

Of course, that sort of misses the point, too. Just because something’s constitutional doesn’t mean the House can’t vote against it.

But I’m with you on the “Get over it” part. Basically, the House GOP is going through this farce only as a fund-raising gambit, like much of what Congress does in keeping with its habit of doing what’s best for political parties rather than the country. No one, but no one, expects this idiotic “repeal” nonsense ever to have the force of law. By the illogic of political parties, it’s perfect legislation: None of them who vote for repeal will ever have to pay any price for actually having repealed Obamacare, but by deliberately frustrating the more excitable parts of the party’s base this way, the party pulls in money.

What? You think “perfect legislation” would be something that actually benefited the country? Well, aren’t you just adorable in your Pollyanna notions of how Washington works…