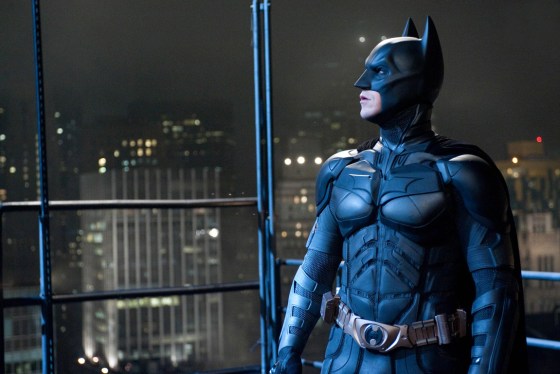 This is downright eerie.

Joe Morgenstern wrote this postscript to his review of “The Dark Knight Rises” in the edition of The Wall Street Journal that was delivered to my home this morning — meaning it went to press well before the mass murder in Colorado:

A note about the perils of being a movie critic in the age of polarized fandom.

I may have saved my life without realizing it by liking “The Dark Knight Rises” sufficiently—or disliking it with sufficient restraint—to have my review categorized as “ripe” rather than “rotten” on Rotten Tomatoes, a popular website that aggregates movie and DVD reviews. For those of us who write about movies to provoke discussion, these reductive categories are awfully silly, but they’re also symptoms of the love/hate, either/or ethos of contemporary discourse. In the realm of the Internet, as well as talk-radio and politics, that discourse has been growing ever more poisonous, and now the poison has contaminated Rotten Tomatoes. Earlier this week the website was forced to shut down its user comments on “The Dark Knight Rises” when negative reviews—officially adjudged “rotten”—by two of my colleagues, Christy Lemire and Marshall Fine, provoked floods of vile responses that included death threats.

Batman movies may be a bit of a special case, what with fanatical fanboys trolling the Internet to root out negative opinions of their supersolemn hero. But the Dark Knight’s acolytes don’t have a monopoly on intolerance of dissent. They’re part of a rising tide that threatens to drown Internet discussion in shrill opinion. The editors of Rotten Tomatoes have the right to excise such clearly intolerable comments, and the responsibility to improve procedures for screening out new ones. Once that’s done, however, the comments function should be fully restored. Free speech for the many shouldn’t fall victim to abuse by the few.

Write to Joe Morgenstern at joe.morgenstern@wsj.com

Wow. If the shootings had NOT happened last night, I would simply have agreed with him about the decline of discourse, particularly on the Web.

As things happened, this is particularly startling.

By the way, the way I learned of this horror was particularly unsettling. I mentioned earlier today having trouble sleeping last night, worrying because my daughter was ill in a faraway country. What sleep I got was punctuated by the sound of my iPhone receiving bulletins about the shootings. The first bulletins confused me — how could there have been a shooting at a mall in the wee hours of the morning? It was only later — 5 a.m. or so — that the more complete bulletins mentioned the midnight showing of this film, so that I understood. To the extent that you can understand anything like this.

29 thoughts on “Eerie coincidence: Critic wrote of death threats related to “Dark Knight” BEFORE the shootings”