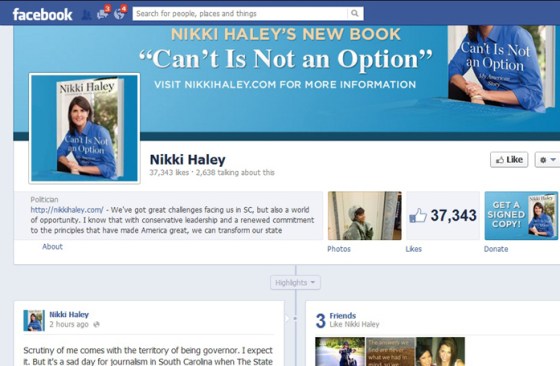 At one point in the midst of his reporting on the Senate’s override of most of the governor’s vetoes, Adam Beam Tweeted this:

Sen. Joel Lourie tells ‪#scgov‬ @NikkiHaley to “stay off Facebook.” He was referring to this post: http://on.fb.me/Q4QnOg

So I followed the link, to where the gov posted,

veto of SC Coalition of Domestic Violence $453,680. Special interests made their way into the DHEC budget. This is not about the merit of their fights but the back door way of getting the money. It’s wrong and another loophole for legislators and special interests to use. Defeated 111-0

Hey, if this is the kind of response she’s going to get, the governor should spend more time on Facebook, not less:

Of course, the comment thread is liberally sprinkled with the kind of “You go, girl!” responses Nikki expects. But it’s far from the unadulterated stream of fawning adulation that caused her to retreat to Facebook as her favored means of communicating with the world to begin with.

Are some of those responses a little on the emotional side, and lacking in calm discernment? Yep. But so are the kind of responses that Nikki goes to Facebook seeking. You can get calm and detached on an editorial page, but our governor scorns that. This is her medium.

I just hope she reads them all.

7 thoughts on “Nikki, you just keep right on Facebookin’…”