This post should be seen as the background to this little drama over the governor’s vetoes, to provide some perspective. What seems to have been missing on most, but not all, of Nikki Haley’s vetoes has been a clear explanation of what she would spend the money on instead.

Her ideology prevents her from setting out powerful arguments for alternative spending plans, because she, like the governor before her, lives in a fantasy land in which the government of South Carolina simply spends too much in the aggregate. That South Carolina bears no resemblance to the one in this universe.

The truth is that South Carolina appropriates far too little for some of the most fundamental functions for which we rightly look to the public sector. And the deficit between what we spend on those functions and what we should in order to have the quality of service other states take for granted is sometimes quite vast, involving sums that dwarf the amounts involved in these vetoes that you hear so much fuss about.

What is needed is a fundamental reassessment of what state government does and what it needs to do, to be followed by the drafting of a completely new system of taxation to pay for those things. Our elected officials never come close to undertaking these admittedly Herculean tasks. But they should. The way we fund state government needs a complete overhaul, and spending time arguing about, say, the “Darlington Watershed Project” doesn’t get us there.

This is something I’ve long understood, and often tried to communicate. I was reminded of it again at the Columbia Rotary Club meeting on Monday.

Our speaker was SC Secretary of Transportation Robert C. St. Onge Jr. He’s a former Army major general, having retired in 2003 — until Nikki Haley asked him to take on DOT in January 2011. Some of his friends congratulated him at the time. Those were the naive ones. The savvy would have offered condolences.

Normally, public speakers like to inspire with phrases such as “From Good to Great.” Sec. St. Onge’s talk was far more down-to-Earth, far more realistic. He entitled it “Getting to Good.” And once he laid out what it would take for SC to get to “good enough” — to get all of the roads we have NOW up to snuff, much less building any roads we don’t have but may need for our economy to grow — it was obvious that we aren’t likely to get there any time soon.

The secretary started out with some background on how we have the fourth-largest state-maintained highway system in the country, after Texas, North Carolina and Virginia. He didn’t have time to explain why that is, but I will: It’s because until 1975, county government did not exist in South Carolina. Local needs were seen to by the county legislative delegation, one of the more stunning examples of how our Legislature has appropriated to itself functions that are not properly those of a state legislature. When we got Home Rule, supposedly, in 1975 and county councils were formed, many functions that had been done on the state level stayed there. So it is that roads that would have been maintained by county road departments in other states are handled by the state here. It’s not that we have more roads, you see — it’s that more of them are the state’s responsibility.

He also noted how woefully underfunded our system is. Georgia, for instance, has less road surface to maintain, but twice the funding to get the job done — and three times as many employees per mile. He alluded to why that is, and I’ll explain: We have the most penny-pinching state government I’ve ever seen, with lawmakers who (contrary to the fantasies you hear from the likes of Mark Sanford and Nikki Haley) would rather be tortured than raise adequate money to fund a decent state government. OK, so the retired general didn’t explain it that way. He just mentioned the fact that we haven’t raised the inadequate gasoline tax that funds his department since 1987 (the year I arrived back in SC to work at The State). Add to that the fact that the tax is levied per gallon rather than per dollar spent, and you have a recipe for a crumbling road system.

Here’s the secretary’s full PowerPoint presentation if you want to look at it. If you don’t, at least look these representative slides, which sketch out the basic challenges… 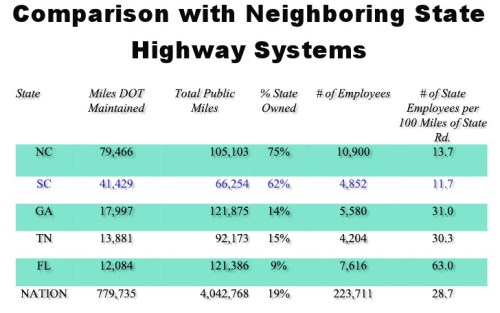 Above compares us to neighboring states. Note that only North Carolina has our bizarre problem owning responsibility for most of the roads. 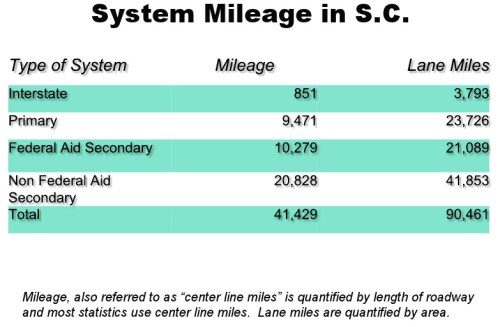 This is a breakdown of the categories of roads SC maintains at the state level. Note that almost half are secondary roads for which the state gets no federal funds. This is where the state is squeezed the hardest. 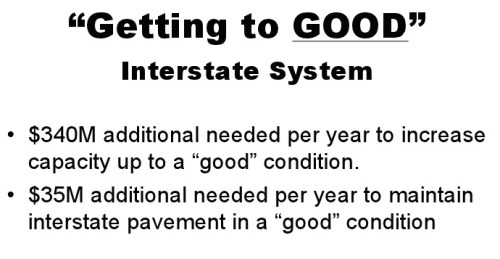 Above is what it would take to get just the interstates in SC up to “good” condition, and keep them there.

This is what it would cost to fix up and maintain all those secondary roads, which make up most of the state’s responsibility. 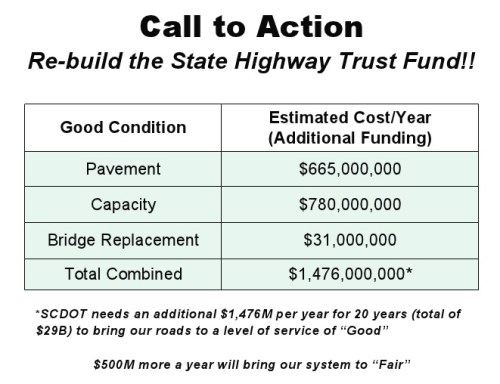 This is the most important slide. This is what South Carolina needs to spend, and has no plans to spend, to get the roads it has NOW up to good condition, and maintain them in that condition.

Gov. Haley could arguably justify ALL of her vetoes by saying, “We need to put it all into our crumbling roads.” Then, after she had eviscerated all of those agencies as being less important than our basic infrastructure, she would have to turn around and call for a significant increase in the state gasoline tax, to come up with the rest of what is needed.

But our elected state leaders never go there. They either don’t understand this state’s basic needs, or aren’t honest enough to level with us about them. They’d rather truckle to populist, unfocused, unthinking resentment of taxes, and government in general, than be responsible stewards of our state’s basic resources.

That’s the money picture. Beyond that, here are some small things that in the aggregate add up to a big problem. If our governor won’t take on fully funding our state roads system, maybe she could work with the Legislature to get rid of some of the worst white elephants that DOT is saddled with: 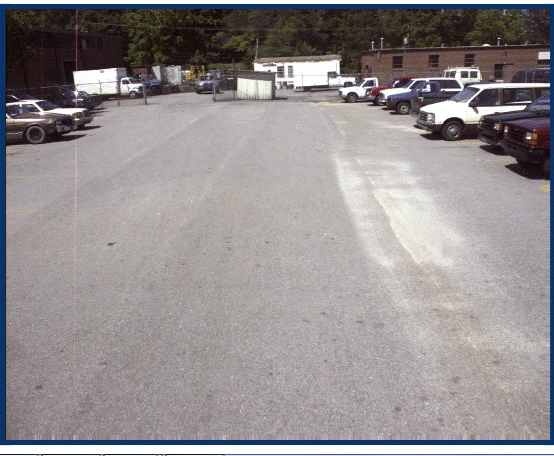 This is a parking lot in Fairfield County that DOT is required to maintain. Sec. St. Onge would like to get rid of it, but can’t. 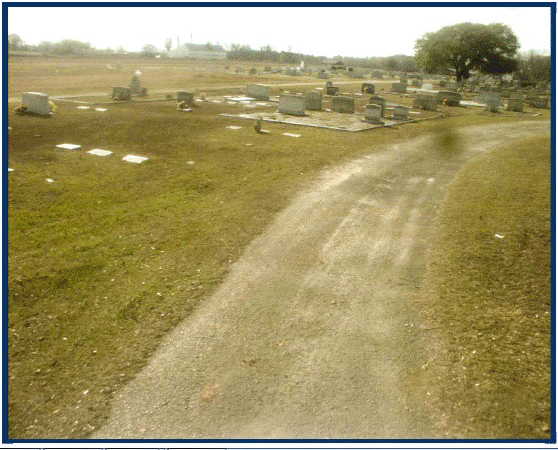 Ignore the dirt road, and look at the cemetery that DOT is required to maintain in Saluda County. Sec. St. Onge would like to get rid of that, too, but he can’t. 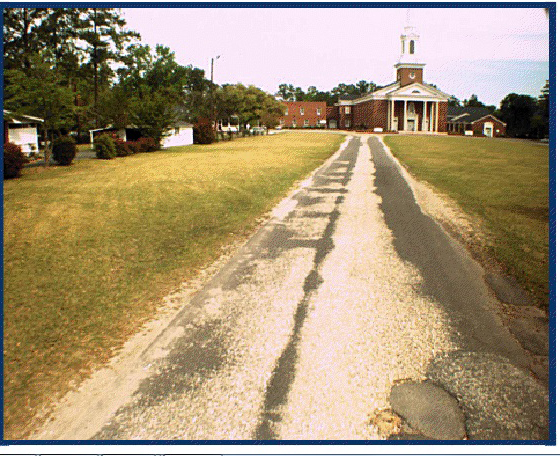 Here’s a road leading to a church in Florence County, which DOT is also required to maintain. The church is the only thing that the road leads to. Sec. St. Onge would like to give it to the church, and the church’s pastor would like to have it. But guess what? They can’t make it happen.

So… I’ve given you examples here from but ONE agency illustrating how we tolerate the intolerable, and refuse to fund the necessary, in our state government. THIS is the sort of thing we should be discussing, instead of having unnecessary culture wars over the Arts Commission.

A couple of last thoughts: Before any of you who think like Nikki Haley’s base start trying to dismiss all this by quibbling about what “good” means, or going on a rant about how these government bureaucrats just always exaggerate the need for funds in order to pad their fiefdoms, consider the following:

45 thoughts on “SC DOT: One example of how SC constantly underfunds basic functions of government”