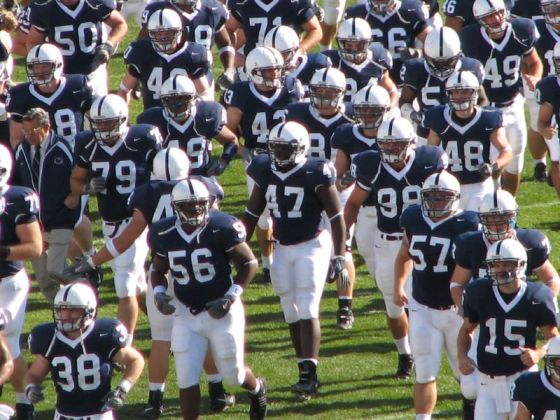 First, I’d like to know whether this Penn State thing is over yet. Oh, I know it will never be over in terms of what happened to the victims of that pervert coach. May God ease their pain. I just want to know whether, now that he has been duly convicted, the bulletins will stop coming on my iPhone, and interrupting me as though war had been declared, as though what happens or doesn’t happen to a college football program in a whole other part of the country from me were of earth-shattering importance. Which it isn’t. I think it reached the height of absurdity on Saturday (or was it Sunday?) when I was awakened (I like to sleep late on weekends) by bulletins telling me that this Joe Paterno person’s statue was being taken down. Really. A statue.

As of this moment, there are four recent bulletins still available on my phone from The New York Times reaching back nine days. Two of them are about Penn State (one is about the Colorado shootings, the other about the new Yahoo CEO). I still have five WLTX bulletins, going back about two days (WLTX has a low “bulletin” threshold) . Two are about Penn State, one of them being about said statue. Another is also about college football, telling me that former Gamecock coach Jim Carlen has died. The other two are actually about things that people in the community might need to know about urgently — the standoff in Five Points on Saturday.

The most recent bulletins to pester me had to do with this morning’s decision by the NCAA as to how it would punish Penn State, in the wake of last week’s finding of a long-term coverup.

First, what the NCAA did not do: It did not close down the football program. If you want to say the program was rotten because of the cover-up, it seems that would be a logical thing to do. But they didn’t. Whatever.

But what grabbed my attention was among the steps taken against the program was that “all victories from 1998-2011 have been vacated,” to which I went, “Huh?”

I Tweeted that out early today, and one reader immediately responded to agree with me. But others started arguing. Beth Padgett, editorial page editor of The Greenville News, explained, “Games won Wins don’t count,” which may make sense to football fans, but not to me. I replied, “You’ve lost me. Probably because I’m not fan, don’t understand the mystique. Facts are facts. Wins are wins. Not that I care…”

Garrett Epps responded to my assertion that “they either WON those football games or DIDN’T, regardless of the unrelated, horrible things some coach did,” with a one-word question: “unrelated?”

Absolutely, said I. Over here, some coach did horrible things. Over there, some kids won some games. One fact is not dependent upon to the other. He responded, “Glad we cleared that up. Sanduskywas NOT defensive coordinator for a number of years? i was confused. Thought he was.”

OK, so… is the theory that without this guy, they wouldn’t have won the games? We know that? How? All we know is what happened.

And to me, whether some kids won some games they played in is a fact that has no moral content whatsoever, good or bad. I could not care less who won those games. But I do know absurdity when I see it. And saying they didn’t win games they did win, for whatever purpose, is an absurd lie. We don’t get to say that the North lost the Civil War because (in South Carolina’s estimation, anyway), William Tecumseh Sherman was a terrorist, and Ullyses S. Grant was a drunk. They either won or they didn’t. (And they did. So, you know, time to take down that flag, boys.)

Saying Penn State didn’t win games it did win is like the NCAA deciding to “punish” the program by declaring the players took the field in yellow uniforms instead of blue. It’s just not true.

I get a clue as to the thinking behind this denial of reality from this WashPost Tweet, “Joe Paterno is no longer the winningest football coach in college football history.”

OK, so, from what little I know about college football, I’m guessing that statement would really hurt Paterno where he lives. If, you know, he lived. But he’s dead. You can’t do anything to hurt him. And as an attempt to do so, this denial of what happened is pretty lame.

I mean, as long as we’re changing history, why not wave the same magic wand and declare that all those kids were not abused by Sandusky? I’ll tell you why not: Because it would be a cruel mockery. Of course they were abused, and that pain will never go away. And it seems extremely unlikely that it would be assuaged in any way by pretending that Paterno’s team didn’t win those games.

20 thoughts on “So did they win those games, or didn’t they?”