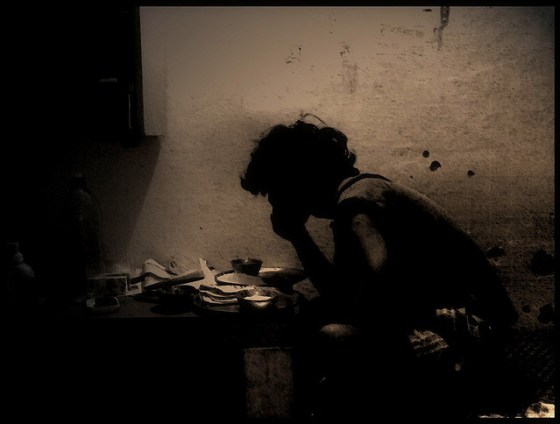 This wonderful photo, entitled "Portrait of Raskolnikov," was taken by Samanyu Sharma of India. I hope he doesn't mind my using it here; it just illustrated my point so well. I couldn't figure out how to contact him.

“You’re crazy,” Clevinger shouted vehemently, his eyes filling with tears. You’ve got a Jehovah complex… You’re no better than Raskolnikov –“
“Who?”
“–yes, Raskolnikov, who–“
“Raskolnikov!”
“– who — I mean it — who felt he could justify killing an old woman –“
“No better than?”
“– yes, justify, that’s right — with an ax! And I can prove it to you!”
— Catch-22

I’ve long had this theory that people who do truly horrendous things that Ordinary Decent People can’t fathom do them because they’ve actually entered another state of being that society, because it is society, can’t relate to.

Quite simply, people like James Eagan Holmes are able to spend time planning a mass murder, prepare for it, gather guns and ammunition and explosives and body armor, and actually go to the intended scene of the crime and carry it out, without ever stopping and saying, “Hey, wait a minute — what am I doing?” because they’re not interacting enough with other human beings.

This allows their thoughts, unchecked, to wander off to strange places indeed — and stay there, without other people making social demands on them that call them back.

I think there’s a quality in the social space between people that assesses the ideas we have in our heads and tells us whether they are ideas worth having, or so far beyond the pale that we should stop thinking them. This vetting doesn’t have to be conscious; it’s not like you’re overtly throwing the idea out there and seeking feedback. I think that in your own mind, you constantly test ideas against what you believe the people around you would think of them, and it naturally affects how you regard the ideas yourself. I think this happens no matter how independent-minded you think you are, no matter how introverted in the Jungian sense. Unless, of course, you are a true sociopath. And I believe a lack of sufficient meaningful interaction with other people you care about plays a big factor in turning you into one of those. 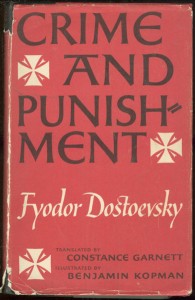 Dostoevsky’s Raskolnikov was the perfect case, fitting all the criteria we keep hearing about. Brilliant young mind, but he suffered a series of setbacks that embarrassed him and caused him to draw away from his friends. Living hundreds if not thousands of miles from his family, he was forced by lack of money to drop out of school. Rather than make money doing the translations his friend Razumikhin tried to throw his way, he fell to brooding in his ratty garret, or wandering alone through the crowded city, thinking — and not sharing his thoughts.

His murderous plan started with a provocative, if not quite mad, idea that he wrote an essay about — setting out the theory that extraordinary people who were destined to do extraordinary things for the world had a right, if not a duty, to step over the normal social rules and boundaries that restricted ordinary people. Had he been in contact with friends and family, they would have challenged him on this, as Razumikhin did late in the book, when he learned of the essay. Maybe they wouldn’t have changed his mind, in the abstract, but if he had been having dinner each night with his mother and sister, and going out for drinks regularly with Razumikhin, it would have been impossible for him to have carried it to the next level.

I’m not saying he would ever have run the idea up the flagpole with his friends and family, and then been checked outright. He wouldn’t have said, “I think my idea’s a good one, so you know what I’m going to do? I’m going to kill that old woman I keep pawning my possessions with, and take her money, and go back to school and achieve my potential.” No. What I’m suggesting is that if you are constantly around normal, decent human beings who care about you, who ground you in humanity, you won’t allow your thoughts to run that far out of bounds. You’ll check yourself.

My “proof” for this theory — which I’m sure has occurred to thousands of other people (I don’t share Raskolnikov’s delusions about my own brilliance) — lies in what happened when, unexpectedly, his mother and sister appear in his life again, right before him in his own dingy room.

It happens after Raskolnikov has committed his crime — a crime that that has an emotional impact on him he didn’t anticipate, although he’s more or less holding up. He has renewed acquaintance with Razumikhin, a bit late for any positive socializing influence to prevent the murders.

And he comes home, and BANG, there are the two most important people to him in the world, the people whose absence had sent him into such a tailspin: 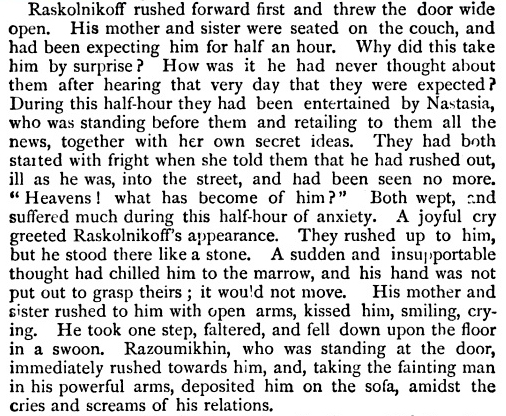 The 40 years since I read that played a trick on me. I could have sworn that the passage was more specific about exactly what happened in his mind when he saw his mother and sister. I thought it said something like, “In that moment, it came to him in a flash what he had done.”

And maybe the translation I read did. Or maybe I was just so sure that that was the “sudden and insupportable thought” that “chilled him to the marrow.”

In any case, it still seems clear that while he had been able to think of his crime in one way in isolation — a way that actually made it possible — he didn’t truly realize what he had done, in human terms, until suddenly faced with the two people who most mattered to him, and who would be most horrified, to the cores of their souls, to know what he had done. He saw himself, and all he was and all his actions, in an entirely different way through their eyes.

Under my theory, if he had been in regular contact with his mother and sister, he would have had that realization long before getting to the point of committing his crime.

20 thoughts on “The Raskolnikov Syndrome”