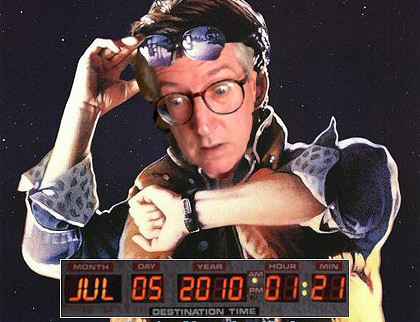 I had a time-travel dream last night.

This is a first for me, which is sort of odd, given what a popular theme that is in movies. I’ve had dreams before in which I encounter people such as my grandparents who’ve been gone 40 years and more, but never a dream in which I was conscious of the fact that I, a denizen of the 21st century, was in another time.

What confirmed it this time was the price of gasoline: In the dream, it was 26 cents a gallon. Which means I landed somewhere between 1949 and 1959. I had a sense that it was within my lifetime, and a time I would have remembered, so we’re talking toward the last two or three years of that period. And no, I don’t remember what I was driving, but I’m pretty sure it wasn’t a DeLorean. It was probably something that didn’t look out of place.

That’s really all I can remember of the dream, but I recall a number of details about this gas station stop. I don’t specifically remember the attendants surrounding my vehicle to pump the gas, check the oil, clean the windshield, etc. I just remember staring at that pump price, and marveling at it.

Of course, it was the old-style pump, and the gauge had the old digital-yet-analog numbers — white on a black background — that physically clicked over to tote up the price as you pumped. The pumps looked kind of like the ones in this picture — the kind with rounded corners, like an old refrigerator, or a car from the early ’50s — only brand-new. The enamel paint on them was shiny white. I don’t recall the brand.

As it happened, my tank was almost full, to the point that I just needed slightly more than a gallon. My total was 35 cents. I felt this great disappointment that I hadn’t had an empty tank, so I could have the pleasure of filling it up for less than five bucks. I wondered whether I could spare the time to drive around a few hours and come back, just to experience that, before having to be wherever I had to be.

But then I realized I had a bigger problem than frivolous disappointment. I had no way of paying the 35 cents.

Out of habit, I was holding a debit card in my hand. I suddenly realized that not only was it useless — no way to swipe it — but I couldn’t let anybody see it, or it would raise questions I couldn’t answer: What’s this strip like recording tape on the back? What’s this shiny square that looks like a mirror, with the shifting image in it?…

I slipped the card into my pants pocket, and even before I started to feel around for change, I realized that even if I had some, none of it would pass a close look — or even the briefest glance, or touch, for that matter. Post-1964 “silver” coins are a different color from coins before that date, and feel different in the hand. They would look like what they are — cheap imitations of real silver. Never mind what would happen if somebody looked at the date, or if it were one of those quarters with the 50-states theme on the back: What’re you tryin’ to pull, Future-Boy?…

Without looking, I knew there was close to zero chance that I’d find a coin that would pass muster. Seriously, when was the last time you saw a pre-1964 quarter outside of a numismatist’s blue book? You still run across dimes and nickels that old, but they’re rare as hen’s teeth.

And don’t even think about trying to pass modern paper money. The shape, the color, the size of the presidents…

I started wondering whether the station manager would take barter (in which case, what did I have to trade that wouldn’t be suspicious?), or trust me for it while I tried to go scrounge the tiny amount I owed him, somehow. It was a tight spot.

And you know what? I’m not sure what I could have done to avoid this problem. I suppose I could have bought the coins from a collector before leaving the present, which would have totally ruined the joy of buying cheap gas, since the coins would have cost me many times their face value.

It’s all just a huge hassle. So take my advice, based on bitter experience: Forget about time travel. Just stay here in good ol’ 2012. Going back’s just not worth the trouble.

15 thoughts on “Take it from me, based on personal experience: Time travel’s just not worth the hassle”