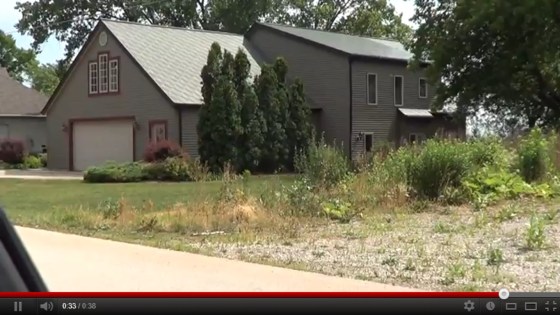 A shot from video footage taken outside the home of a candidate.

While most serious campaigns on both sides use campaign trackers — staffers whose job is to record on video every public appearance and statement by an opponent — House Democrats are taking it to another level. They’re now recording video of the homes of GOP congressmen and candidates and posting the raw footage on the Internet for all to see.

That ratcheting up of the video surveillance game is unnerving Republicans who insist that even by political standards, it’s a gross invasion of privacy. Worse, they say, it creates a safety risk for members of Congress and their families at a time when they are already on edge after a deranged gunman shot former Arizona Democratic Rep. Gabrielle Giffords 18 months ago.

Wisconsin GOP Rep. Reid Ribble, who said he’s also been followed by a cameraman when shopping for groceries, said the home videos cross a line.

“I feel it’s totally inappropriate,” said Ribble, a freshman facing a competitive race for reelection. “It was disturbing to me that they would put that online. I don’t understand any political benefit that can be achieved with that.”…

Yes, indeed, say I. They’ve gone too far. But then, I think the whole phenomenon went overboard, across the spectrum, years ago. I have a low threshold with this kind of stuff.

There’s nothing illegal, certainly, about following one’s opponent around with a video camera. And everyone does it, right? One can even argue that a conscientious candidate should be fully aware of what his opponent has to say.

But in this era of saturation communication, stalking one’s opponent with a camera hoping for a slipup, a gotcha! moment, is not only unnecessary, there’s something low about it. And I confess that when I’m at a political event, and I spot the opposition’s tracker, I can’t help looking upon that person with something akin to disdain.

I don’t expect many people to agree with me on this. Certainly not many journalists today, since so much of their material comes from this sort of thing.

But I was always a different sort of journalist. I always wanted to know what a candidate has to say after he thinks for a minute, not what he says when he misspeaks. Some pop-Freudians believe the slip is the truth. Sometimes it is, sadly. But I’ve always valued more what the candidate says when you give him or her a chance to think a little harder about it. When a candidate says, “That’s not what I meant,” the gotcha folks snicker. Me, I start paying closer attention to find out what he or she did mean. And I flatter myself that I can tell, usually, if the further explanation is just blowing smoke.

Maybe I look for the second thought because that’s how I hope (idealist that I am) that they will govern — in a deliberative manner, with their ideas morphing and growing and getting better in a ferment with other ideas. I want to be governed by what people think upon further reflection, not the first thing that pops into their heads.

And even if they never achieve that, I want to give them every opportunity to do so.  I want to hear the “yes, but…,” the second and third and fourth thoughts. I want depth of consideration. Deliberation, the thing upon which republican government relies.

23 thoughts on “Yes, “trackers” HAVE gone wild, and then some”