Here’s the thing, folks — I long ago decided that it was better to write about something out-of-cycle than it was never to address it. And them’s the choices you gets, folks, more often than not. Other bloggers, fearing to be seen as slow, will drop an idea after a couple of days. And of course I DO drop far, far more than I’d like. But if I get a chance to go back to something,  I do.

I discovered that almost immediately when I started doing this in 2005. The original idea is that I would put EVERYTHING on the blog — my notes from every editorial board interview (most of which never got a mention in the actual paper), every opinion idea that I had but didn’t have room for in the paper.

But that proved impossible. So now I get to the things I get to, and that’s it. The sad thing is, many of my best ideas for posts never get written, because they would take too much time, while I toss up little throwaway things just to keep the plates spinning.

But still, when the occasion arises later, I try my best to get back to the good stuff.

Oh, by the way, here’s the thing that Corey was referring to:

“Gina, I am not going to answer any of your questions,” Haley responded, moving on to take other reporters’ questions.

Asked why Haley would not answer Smith’s question, Haley spokesman Rob Godfrey responded: “The governor believes respect should be a two-way street.”

Yes, it is. And it would be nice if the governor would grow up and start answering reporters’ respectful questions with matching respect, both to them and their readers. A two-way street indeed.

As is her wont, rather than stand up and tell reporters why she is acting like a middle-schooler, our young governor took to Facebook to air her innermost feelings (and you know, that’s what it’s all about — Nikki’s feelings):

In response to my refusal to answer Gina Smith’s question today: she is the same reporter that 1)wrote a Front Page, Above the Fold story about me being indicted, with no truth what so ever. 2)She went on to write a story about my 14 year old daughter without having the facts, against the urging of SLED Chief Keel that said it was unprecedented to write about a governor’s child knowing the safety concerns. Respect is a two way street. 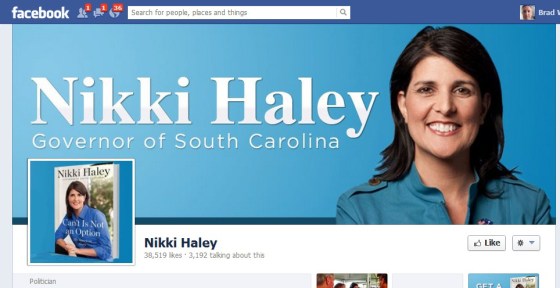 Our virtual governor, in her comfort zone.