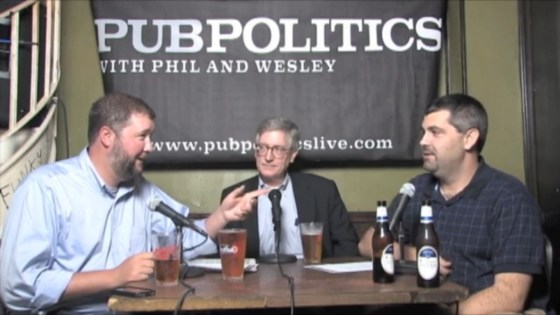 Screenshot from my 7th Pub Politics appearance, in October 2011, with Phil (left) and Joel (right).

@BradWarthen any questions for @joeldavidsawyer or Phil Bailey for tonights #E122QA? Let them shower you with knowledge and wisdom.

Nothing comes to mind immediately, but I thought I’d check with y’all.

As you probably know, @joeldavidsawyer is the former Mark Sanford press secretary (post-Will Folks) who helped run the SC campaign of Jon Huntsman before going to work as a consultant with Wesley Donehue, for whom he sometimes subs on Pub Politics.

Phil Bailey, of course, is the other regular co-host, who also works for the SC Senate Democrats. He is no longer known by his Twitter handle because of, you know, the “Sikh Jesus” thing.

7 thoughts on “Any questions for Pub Politics tonight?”