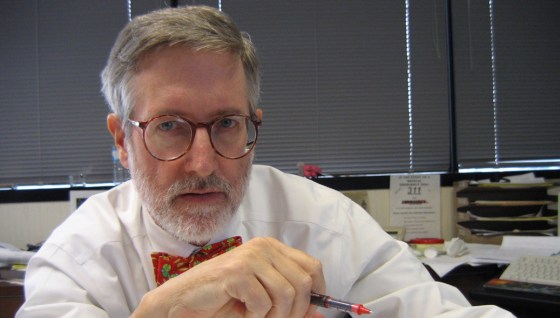 At my desk at The State, evincing one of those moods./file photo from 2007

Today, grumpily wondering whether I’ll find the Democratic Convention next week as vapid, monotonous, insulting and obnoxious as I did the sliver of the GOP convention I listened to last night, I was reminded of column I wrote four years ago.

If past is prologue, it would seem the answer to my dreary question is “yes.”

That column, which ran on Aug. 31, 2008, was headlined, “Yelling at the television.” If you go back and read it, it will tell you what the rest of this week and all of next week will be like, if you find the parties as disgusting as I do.

What sets me off? Oh, take your pick — the hyperbole, the self-importance, the us-against-them talk, the stuff that Huck Finn called “tears and flapdoodle.”

Take, for instance, this typical bit from Hillary Clinton’s speech:

My friends, it is time to take back the country we love. And whether you voted for me or you voted for Barack, the time is now to unite as a single party with a single purpose. We are on the same team. And none of us can afford to sit on the sidelines. This is a fight for the future. And it’s a fight we must win together. I haven’t spent the past 35 years in the trenches… to see another Republican in the White House squander our promise…

Let’s deconstruct that a bit.

Take back the country? From whom? Did I miss something? Did the Russians roll right on through Gori and into Washington? No? You say Americans are still in charge, just the “wrong” Americans, of the wrong party? But your party controls Congress! Take it back from whom?

… a single party with a single purpose. Now there you’ve hit on the biggest lie propagated by each of the major parties, the conceit that there is something coherent and consistent about such loose confederations of often-incompatible interest groups. Did you not just spend the last few months playing with all the force you could muster upon those very differences, those very tensions — between feminists and black voters, between the working class and the wine and cheese set? What single purpose, aside from winning an election?

This is a fight… No, it isn’t, however much you love to say that. Again, I refer you to what the Russians are doing in Georgia — that’s a fight, albeit a one-sided one.

… that we must win together. Actually, that raises a particularly pertinent point, which is that the only “fights” that “must” be won are the ones in which “together” is defined as all Americans, or all freedom-loving peoples, whereas such divisive factions as your party and that other one that will meet in St. Paul militate against our being able to win such fights together.

I haven’t spent the past 35 years in the trenches… You’re absolutely right; you haven’t. So spare us the war metaphors.

… to see another Republican in the White House squander our promise… Like that’s what matters, the stupid party label. Like there isn’t more difference between you and Barack Obama in terms of philosophy and goals and experience and what you would bring to office than there is between John McCain and Joe Biden. Come on! Please!…

I was pretty disgusted back then. Now, I enjoy reading about how disgusted I was. I always find that my writing improves with distance…