We think of Paul Ryan as an über-libertarian on fiscal issues and as a social conservative. What I didn’t know anything about until this morning was how he stood on the most urgent questions a commander in chief faces — which is pretty critical in the event that Romney is elected, and something happens to him.

One expected the opinion writers of The Wall Street Journal to be hugging themselves with pleasure over Ryan’s fiscal notions. But today, Bret Stephens writes in the Journal about a speech Ryan gave to the Alexander Hamilton Society last year in which he expressed himself on foreign policy. Here’s the speech, and here’s the column. An excerpt from the latter:

Here, in CliffsNotes form, is what the speech tells us about Mr. Ryan. First, that he’s an internationalist of the old school; in another day, he would have sat comfortably in the cabinets of Harry Truman, Jack Kennedy or Ronald Reagan. Also, that he believes in free trade, a strong defense, engagement with our allies—and expectations of them. Also, that he wants America to stay and win in Afghanistan. Furthermore, that he supports the “arduous task of building free societies,” even as he harbored early doubts the Arab Spring was the vehicle for building free societies.

It tells us also that Mr. Ryan has an astute understanding of the fundamental challenge of China. “The key question for American policy makers,” he said, “is whether we are competing with China for leadership of the international system or against them over the fundamental nature of that system.”

Within the speech itself, perhaps the most cogent observation is that the United States doesn’t have the realistic option of fading as a world power the way Britain did, and the way so many on the left and right would like it to do:

Unlike Britain, which handed leadership to a power that shared its fundamental values, today’s most dynamic and growing powers do not embrace the basic principles that should be at the core of the international system.

Now, that’s the sort of thing I agree with. What I don’t agree with is that we have to do all the things Ryan wants to do domestically in order to afford the kind of global position that we can’t afford to surrender. Which takes us into all sorts of other debates that I’m sure we’ll get into before the election…

Anyway, that’s where he loses me. What I didn’t get from the column, and did get from the speech itself, is that for Ryan, the need to maintain U.S. responsibilities in the world is yet another excuse for doing what he wants us to do on the homefront. Of this, I am unconvinced. I agree we have to get our fiscal house in order. I don’t necessarily believe his ideas are the way to do it. Bottom line, we get back to where we started — in his case, his view of America’s role in the world is that of an über-libertarian on fiscal issues…

Stephens is less divided in his admiration. In part, he admires Ryan for setting out clear ideas without any of the softened edges with which presidents must speak, giving little consideration to the fact that House members with no diplomatic responsibility are far freer to speak frankly on such matters.

The truth is, I have generally agreed with the actual actions Mr. Obama has taken as commander in chief (although my views on Afghanistan more closely track Ryan’s). And those speak louder than words, however stirring.

For instance, Stephens likes the way Ryan talks tougher about the Chinese. But it is Barack Obama who has shifted future defense planning toward the Pacific Rim with China in mind, and recently decided to send Marines to Australia in keeping with that strategy.

In any case, this is the beginning of a learning process about Ryan. Although I’m already inclined to agree with Stephens that, in terms of ideas at least, the GOP ticket seems upside-down. 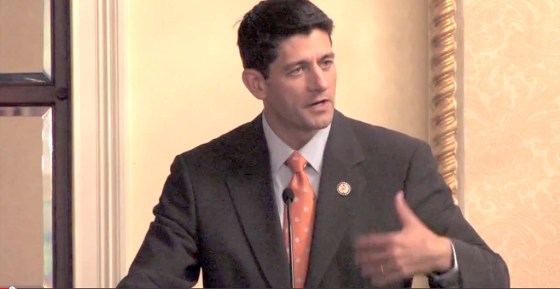 4 thoughts on “I like Ryan’s foreign policy ideas for themselves, NOT as a justification for his domestic proposals”