OK, you know veep candidate Paul Ryan is a major policy wonk. One thing you might not think of him as is a good old boy. But a magazine with a name that sounds like a stutter — Deer and Deer Hunting — is aiming to set you straight. See this release:

Republican vice presidential candidate Rep. Paul Ryan opens up to Deer & Deer Hunting Magazine about his love of the outdoors. 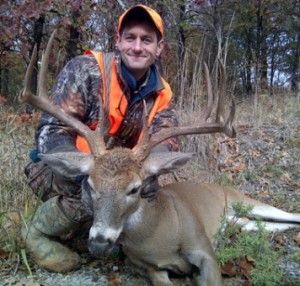 “Bowhunting is my passion,” said Ryan to Deer & Deer Hunting’s Editor Alan Clemons. “Studying the strategy, preparing food plots, the strategy of where a dominant buck is living or will be moving and then being in position to get a shot, that’s really exciting.”

If you’d like to learn more about the interview, I can provide you with the pre-released interview, a press release, a copy of the magazine issue or any additional information you may need.

For more information on Deer & Deer Hunting, please go to www.deeranddeerhunting.com. For any questions, please do not hesitate to ask.

I didn’t get to read the whole story because I didn’t want to give the mag my email address and have a whole new batch of emails to delete (I’ve made that mistake too many times in the past). But I confess to being curious as to whether the piece contains any other quotes as, um, interesting as “Studying the strategy, preparing food plots, the strategy of where a dominant buck is living or will be moving and then being in position to get a shot, that’s really exciting.”

Yeah, OK. I thought he only got that excited about cutting Medicare costs.

Of course, I’m a bit of an old hand with a bow myself. One day when we were in England last year, we were strolling in Hyde Park and came across a sort of carnival, which had a booth called “Robin Hood,” which enticed marks to shoot an arrow at balloons. Sure, it could have been a trap set by the sheriff, but I couldn’t resist. I immediately laid down my five quid (the real Robin Hood would have loved to find a fat friar carrying that on him), gave my camera to my wife to record the moment, and took my three shots. Unfortunately, my wife thought the camera was set for still photos rather than video, and merely aimed it at me, pressed the shutter release, and turned away.

OK, so that last part didn’t really happen. But I did get one of the balloons. Of course, I’m sure that doesn’t match the excitement that Ryan speaks of. But that’s OK by me. 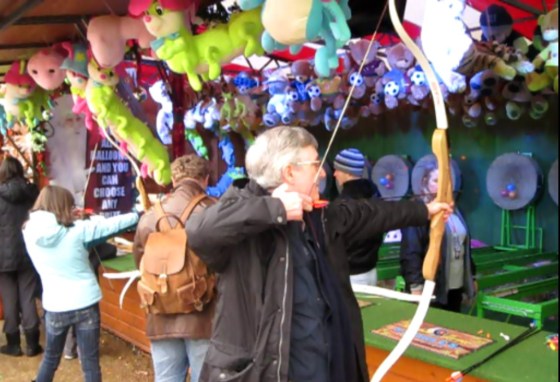