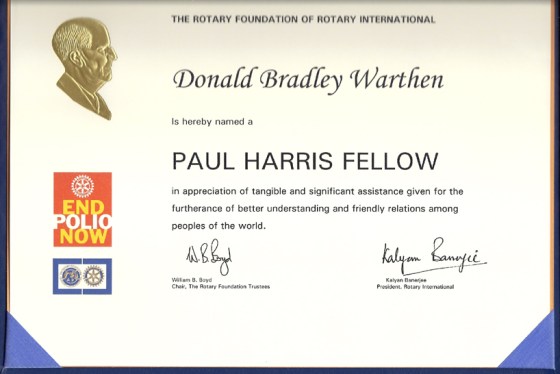 Today, I was one of a group of Rotarians called up to the front of the room and honored for becoming “Paul Harris Fellows.”

Let me try to explain, simply, what that means to Rotary: It means the “fellow” has contributed $1,000 to the Rotary Foundation. Although I’ve been told probably 100 times what Rotary Foundation does, I can’t seem to remember. According to this website, the Foundation’s mission is “is to enable Rotarians to advance world understanding, goodwill, and peace through the improvement of health, the support of education, and the alleviation of poverty.”

Which is kind of general and vague, bearing a marked resemblance to a response given by a Miss America contestant. In a recent note of thanks I had gotten from Rotary International for a contribution of $9 (I have no memory ever of having given precisely $9 to the Foundation on any occasion), I got an elaboration:

On behalf of the mother who will receive prenatal care, the father who will have access to fresh water for his family, and the children who will learn to read and write in their newly furnished school, thank you for your gift to The Rotary Foundation’s Annual Fund. Your contributions provide immediate funding to projects that assist these individuals, these families, these communities.

If the first statement was too general, those examples were a little too specific, too retail, for me to get a clear idea of what the Foundation does. But that doesn’t matter much to me. I belong to Rotary for the fellowship of the specific people who are in the Columbia Rotary Club, and Rotary International remains to me not much more than a remote concept. Giving to the Foundation is just something Rotarians do.

Now… all of that said, my purpose in this post is not to communicate what the fellowship means to Rotary, but what it means to me, which is not the same thing at all. Oh, another thing I’m not doing — I’m not trying to get you to think I’m a swell guy for giving a thousand dollars to advance world peace, end poverty and so forth. It was pretty painless. In fact, most of the money I gave wasn’t even mine.

To get to my point…

A little more than 11 years ago, my wife was diagnosed with breast cancer. It had already spread to her liver when it was found. We found this out in a quick series of shocks: First the lump, then the exploratory surgery that found that the nodes were involved, then the biopsy that found multiple tumors in her liver. Stage four cancer. It is a brutally blunt understatement to say that her survival chances weren’t good.

We lived the next few months in a fog of anxiety mixed with urgent determination to do whatever we could. When 9/11 happened, it had little emotional impact on me; I was too wrapped up in this (I wrote about that in a column at the time). There was the quick series of interviews to find the right oncologist (we found the best in Bill Butler). Then the biopsies, and one bad report after another. Then a massive round of chemo. Then the surgery. Then a brief period of recovery, followed by another devastating round of chemo. Followed, after another brief time for recovery, by radiation. Then, the beginning a routine of milder chemo treatments every three weeks for the next eight years.

One night, early in the process, I was watching television, and for a moment, had stopped thinking about this horrible thing. My wife, who had been on the Internet where she spent so much of her time during that period, walked in and said she had good news — she had found a site that said she might live for five years if everything went right. That, she said, was easily the most optimistic assessment she had found. I was devastated. That might, in fact, have been my low point. I had not actually internalized, in a quantitative sense, how bad things were until that moment. And my shock was exacerbated by guilt, for having for a moment forgotten about this thing hanging over us. Watching stupid television.

We got through this time through the prayers and concern of many, through determination, through the skillful guidance of the folks at S.C. Oncology Associates, with the helping hands of friends (all sorts of folks brought us dinners during that period). One evening our pastor, Monsignor Leigh Lehocky, visited and spoke with us. I don’t remember all that he said, but I came out of that meeting with a particular focus on something Jesus told his followers more than once: Think about today; don’t get wrapped up in worrying about tomorrow. Sufficient unto the day is the evil thereof. Ask for your bread daily, not for storehouses that will supply you for life. Storehouses just keep you up nights.

So for my part, that’s what I did. I drew a line. I did not think about tomorrow, because it didn’t bear thinking about. I just focused on what we needed to do today to fight this threat.

But then one Monday, early in the crisis — sometime in the summer of ’01, I think — someone at Rotary spoke about how everyone in the club should try to become a Paul Harris fellow. The speaker — I don’t recall who it was now, although I can remember where I was sitting in that room at Seawell’s — said you don’t have to write a check for $1,000, although some in the club would do that. He or she said we could just commit ourselves to giving $25 a quarter, and in 10 years, we’d have accomplished the goal.

I don’t think anyone noticed what was happening to me, and I was glad for that. But I was shaken.

As much as I resented that pitch, at some point I started making the payments. It wasn’t about me; it was about the mission of Rotary, and I was in Rotary, so…

In any case, it wasn’t me doing the paying. I was in Rotary because my publisher (Fred Mott at the time) had told me to join (and because Jack Van Loan was recruiting me). The newspaper completely paid my way as a member. So, as the executive in charge of the editorial division budget — and as a member of the newspaper’s contributions committee, back in those days when we still had money to distribute in the community — I made the decision that if I were to be a member in good standing, the cost of contributing to the Foundation should be added to those quarterly payments I signed off on. It was a justifiable expense.

When I got laid off in 2009, I had a couple of decisions to make, among many others: One was whether to stay in Rotary, given that I had to pay for it myself now. The other was whether to keep making the Foundation payments. I’ve made these decisions over again every quarter when the bills come. Each time — so far — I’ve answered “yes” to both. So I guess a little over $300 of that thousand has come from me, in small increments. I sort of figured, I had come this far… and by this time, all members were expected to at least be working on becoming fellows. It really wasn’t seen as optional.

Since that first $25 payment, a lot has happened to us in our personal lives. Our children, three of whom still lived at home in 2001, have gone through all sorts of passages — graduations, and weddings for two of them. Most wonderfully, four more grandchildren have come into our lives.

My wife was first told she was definitely in remission early in 2002. In 2010, Dr. Butler said he thought it safe to take her off chemo altogether (for years, the regimen she was on didn’t have enough of a track record to give him a guide on when it would be safe to stop it).

For the past four-and-a-half years, she has spent most of her waking hours taking care of our four youngest grandchildren. She is their Nonni, and it would be impossible to overestimate how much she means to them. She is an irreplaceable part of their world, as she is of mine, and our children’s.

Last year, we spent 11 days in England, after delivering our eldest granddaughter to her Dad, who was studying at Oxford. Aside from one trip to Disney World with our two youngest daughters some years back, it was the first time we’d ever been able to go anywhere together other than the beach, or to visit family. We had a wonderful time together. Now, inspired in part by a whirlwind European tour our youngest daughter just returned from, we’re working on coming up with an excuse to go visit Wales and Ireland next summer. We may just go anyway, excuse or no.

So this is what the Paul Harris Fellowship means to me: It’s not about world peace or ending poverty, as wonderful as those things are. It’s not about standing up there today and having my fellow Rotarians applaud and congratulate me and the others, as kind as their intentions are.

What it means is that, even when things are at their darkest, the future is a thing worth investing in. Maybe you won’t make it to the end of the next decade; there are no guarantees in this life. But you might. And it’s worth a try.

17 thoughts on “What my Paul Harris Fellowship means to me”