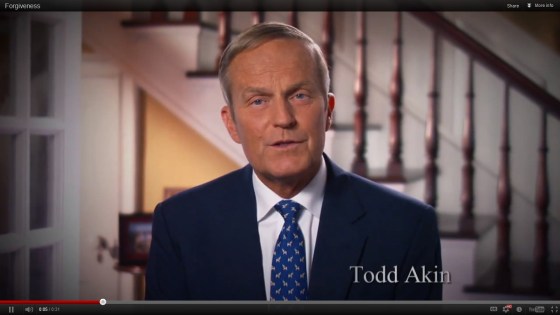 All the moralizing on this previous post about the work Wesley Donehue is doing for this month’s pariah, Todd Akin, goads me to share what I actually think of Mr. “Legitimate Rape.” Even though I know it’s going to make pretty much everybody mad at me.

To begin with, Akin is one of those people who makes you furious because he’s on your side of an issue (if you’re me), and he’s giving people on the other side of the issue more than enough excuse to dismiss you and all who think like you (or, once again, to be more accurate, me) as idiots or evil or both.

The issue here being abortion, not rape. The thing (I think) I agree with him on, that is.

As for being an idiot or evil, well, I reject both with regard to myself, although of course I’m not perfect. With regard to Akin… I don’t think he’s evil, although he possesses a certain very common character flaw (which will be my point, when I get to it) in an extreme form. And as to the idiot part… well, my wife often calls me down for calling people idiots, which is one of my character flaws — and after all, we are specifically enjoined from doing so, and very sternly warned about it, in the Bible.

But… confession time here… when I heard about what Akin said, and then saw a picture of him, one of my first thoughts was, Yes, he looks stupid enough to have done that. Which I know is wrong, to leap to such a conclusion just from looking at someone. I am in fact quite embarrassed to confess it. But there it is.

Basically, Akin tried to make a point that would have been extremely objectionable to most people even if he had put it in the most diplomatic way possible. And then, he managed to put it as offensively as possible. This suggests a sort of genius for offending, but again, I look at him and I think he only stumbled on this perfect combination by accident.

Neither I, nor I suspect his most vehement political opponents (although I could be wrong here) thinks that Akin meant to say that any sort of rape is “legitimate,” in the sense of being licit, or a good thing. So we can set that aside. (And yes, I know I’m setting aside a whole, complex discussion about how some people reject that all cases of rape are “real” rape, but I’m trying to address a separate point, and believe me, this post is going to be long enough.)

And of course, I think he was just trying to defend a political position that I share — the notion that if one truly believes that abortion takes a human life, one cannot defend exemptions for rape or even incest.

And yet, I, too, am deeply offended by what he said. I see it as both foolish and wrong. But then, I think his sin is a very common one.

Finally I get to my point: Like many, many people across the political spectrum, Akin sought to rationalize away any human cost of his own political position. What he did reflects both sloppy thinking and a sort of moral cowardice. And it’s a function of the absolutism that infests our politics today.

Akin and I agree that you can’t have exemptions for rape when you’re talking about a human life. That innocent unborn human didn’t commit the rape, and condemning him or her to death for it is unjust in the extreme. I’m deeply opposed to the death penalty even for murderers, but I can certainly see more justice in that than I can in this.

But here’s where Akin and I diverge: He wants to explain away the consequence of this position. He wants to say, well, if it’s really rape, then the woman won’t get pregnant. Which is amazingly foolish and ignorant, but which seems to arise from a very human desire to believe that no innocent human being will suffer because of the position I’m taking.

I know better. I’m not going to shy away for a moment (I hope) from the fact that the human cost to a woman caught in this kind of situation is horrific, beyond even imagining. I can’t even begin to think of what to say or do that would ease the suffering of a woman in such a situation (aside from such weak expedients as providing material support). I don’t want her to be in that situation, any more than the pro-choice person does. It awakens in me powerfully strong protective impulses, and vindictive ones, including a determination that the person responsible for it must be punished to the fullest extent of the law (while, at the same time, knowing that no amount of punishment could possibly erase this woman’s pain). I am fully aware of the terrible odds her child will face — not only not being wanted by his or her mother, but being the material embodiment of the most horrible moment in her life.

But none of that justifies killing the child, either before or after he or she is born. Not in any truly moral balance that I am capable of conceiving. As much as I understand the pro-choice advocate’s desire for a magic solution that makes at least this one facet of the crime go away for the woman, I can’t see any way that that expedient is justified in a society that is just. It in fact adds another moral horror to that which already so unjustly exists.

It’s not comfortable to face and acknowledge the additional pain to which having to bear this child would condemn a rape victim, but I see no moral alternative to doing so. Akin? He wants to cop out on it.

But that’s a common impulse. Too seldom do any of us face up to the very real consequences of the positions we take. We like to believe that our attitudes are all to the good, that nothing bad would happen if only the things we believe were acted upon. And in the take-no-prisoners absolutism of today’s politics — in which each side wants to see itself as all good, and the other side as all bad — people regularly paint themselves into corners trying to make their positions look as good as possible. And to make themselves feel good about those positions. There are a lot of Todd Akins out there.

For instance… and here’s where I make everybody mad… there are those on the opposite side of the abortion issue who rationalize away the human life that is destroyed by abortion. They say it isn’t a human being at all, even that it’s nothing more than a random collection of cells, and ridding oneself of them has no more moral weight than sloughing off dead skin.

(Not all do this, of course. Right off the bat, I can think of pro-choice friends who have persuaded me that they are fully cognizant that abortion takes an innocent human life and that it is deeply wrong — but that the imperative of choice overrides it. This chills my blood — just as my antiwar friends are chilled by my advocacy of some military actions in spite of my pro-life beliefs — but I can’t criticize them for failing to face reality.)

They say this — that the fetus is not a human being — because they would find the moral burden of believing their position results in the destruction of innocent human life even more unbearable than Akin would find it to contemplate the suffering of a rape victim. (Now, before all my pro-choice friends shout that they say it because they believe it, let me quickly interject that I know you believe it. I just, personally, find it very hard to believe that you would believe such an unlikely thing without a powerful human need to rationalize, which is related to the fact that you are a good and caring person.)

Now to an empiricist, of course, there’s a difference between Akin’s rationalization and the it’s-not-a-human-being rationalization — one that I readily acknowledge. After all, you can physically, scientifically prove that Akin is wrong in his fantasy about true rape not leading to pregnancy. Whereas science can’t prove or disprove that a fetus is human — no matter how strongly I believe it unlikely that smart people would assert that it isn’t, in the absence of this powerful cause for rationalization. Nevertheless, I’m convinced that similar mechanisms are at play.

This dynamic translates to other issues, of course. There are those who advocate war, and blind themselves to the worst aspects of the human cost — such as the deaths of noncombatants, at the most extreme end of that spectrum. On the other side are those who are so opposed to war and its horrific human costs that they try to rationalize away the cause for war — minimizing the evils of the Saddam Hussein regime (how many times have I read that we invaded an inoffensive country that wasn’t doing anything to anybody, as though it were Switzerland?), or the costs of a precipitate withdrawal from Afghanistan, allowing the Taliban to rise again.

There are costs both to acting militarily and not acting militarily, and it’s wrong to blind yourself and try to wave them away. For my part, seen as I am here as the bloodthirsty warmonger, I try never to turn my mind from the horrors of war, and I recoil from efforts to make war seem costless just as much as I reject attempts to paint it as never worth engaging in. And for me, the horrible thing about war is not just that innocent civilians, or one’s own soldiers, get killed and maimed. Every armed enemy’s death also diminishes us. (I’m reading right now a phenomenal book about the cost of killing in war, Dave Grossman’s On Killing. It powerfully reinforces something I have long believed — that the greatest price we ask of a soldier is not that he die for his country; the most awful thing we ask of him, the thing that costs him the most, is expecting him to kill for his country.)

Well, I could go on and on. Actually, I have. There are other places I could go with this, carrying this phenomenon out of the realm of life-and-death issues. I could get into how, for instance, in this absolutist political atmosphere, neither those who want more government spending nor those who advocate shrinking government small enough to drown in a bathtub like to face that there are tradeoffs to their positions… but I think this is enough for how…