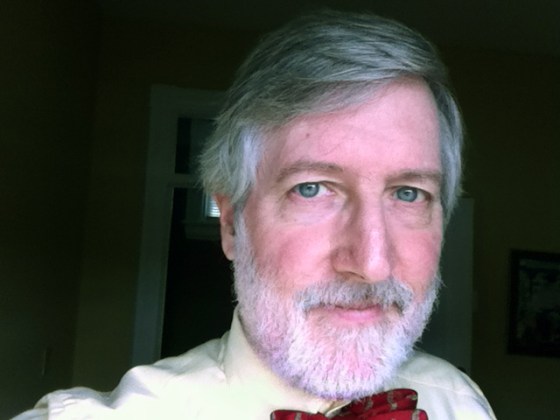 Have you seen any of the series AMC has been rerunning lately, “Into the West”? I watched some of the first episode. It had a lot of mountain men in it. I thought, “What a fine bunch of distinguished-looking gentlemen…”

Lately whenever we have a meeting with an ADCO client, one of my colleagues will at some point in the meeting say something like, “In case you’re wondering why Brad is looking like this…”

To put it one more way: Lately I have not been mistaken for Don Draper.

Here’s the story:  I have a role in the South Carolina Shakespeare Company’s production of “Pride and Prejudice,” which opens at Saluda Shoals Park. And yes, we all know that the Bard did not write that one. But I suppose the company’s repertoire is broader than its name suggests.

Our director, Linda Khoury, has asked us not to get our hair cut from here on — mine was already pretty shaggy by the time she said that. I had also stopped shaving at that point. But English gentlemen did not wear beards during the Regency Period, you will no doubt say. You are right. But I thought it would look a little less crazy and anachronistic if I grew the whole thing out, and then cut it back to muttonchops at the last minute.

I have a fairly small part in the production, which suits my comfort level at this point in my acting career. It’s been more than a quarter century since I have trod the boards for anything more than a cameo, so it’s nice to know I don’t have more than about five lines.

I’m playing Sir William Lucas (who was played by this guy in the definitive 1995 BBC series). If you know the story, you know Sir William and Lady Lucas are sort of the local aristocracy in the environs of Meryton in Hertfordshire (and their daughter, Charlotte, is Miss Elizabeth Bennet’s particular friend). My character was in trade before his elevation to the knighthood, which I’ll thank you not to mention. Sir William’s function in the play is to throw the ball that gets the principal characters together, introduce them, and try with mixed success to get them to dance and have a good time. Sir William is sort of an early 19th-century party animal, and regularly gives two balls a season.

In being the hearty, jovial, back-slapping good-time Charlie, I’m playing against type, which I hope everyone will take into account in assessing my performance. (The character in the play whose personality is most like mine is Mr. Darcy, and I’m just a year or two too old for that.)

I got involved in this because my daughter and granddaughter are in it. They are portraying Lady Lucas and Miss Kitty Bennet, respectively. We’re all having fun so far.

Here’s the info on the performances:

Columbia SC—The role of The Bard will be temporarily played by the world’s most famous femaleBritish literary icon, as The South Carolina Shakespeare Company (SCSC) presents a celebration of all things Jane Austen to kick off its 2012-2013 season.  With a fast-paced and engaging adaptation of Pride and Prejudice and the debut of Cheer from Chawton, an internationally-acclaimed one woman Jane Austen tribute show, the Austen performances usher in SCSC’s 20th anniversary season featuring an extended calendar of events that include a winter production of Paul Rudnick’s contemporary comedy I Hate Hamlet and Carlo Goldoni’s classic comedy A Servant of Two Masters.

Entertaining thousands of South Carolina audiences with no-cost cultural enrichment since 1992, SCSC has selected Jon Jory’s staged adaptation of Jane Austen’s most famous work, Pride and Prejudice, as its season opener. A tale of love and values in class-conscious England of the late 18th century, Pride and Prejudice is a witty romance featuring the five Bennet sisters – including strong-willed Elizabeth and young Lydia – young women who have been raised by their mother with one purpose in life: finding a husband.

“With the debut of our 20th season, we are presenting a novel experience for our loyal audience but one that is also in keeping with our classical programming,” said Linda Khoury, founding director of the SCSC. “Jane Austen is an author who shares Shakespeare’s cultural relevance and she is universally praised for her keen observations and strong critiques of classicism and economic conditions of the 1700s. The wit, wry commentary and romantic travails of her characters are contagious for both Austen-ites and new fans alike.”

With such immensely popular material that has enjoyed high-profile film and miniseries treatments, Khoury has assembled a top-notch cast that is challenged with surpassing any existing impressions people may have of this famous story.  Pride and Prejudice will feature Scott Blanks, Gene Aimone, Katie Mixon, Jessica Mitchell, Tracy Steele, Marcus Thomas, Sara Blanks, and Malie Heider.

Pride and Prejudice will be performed October 5—7 at Saluda Shoals Park at 7:30 pm and October 17—20 and October 24—27 at the Finlay Park Amphitheatre beginning nightly at 7:30 pm.

As audiences prepare to encounter Austen’s memorably rich characters, they will also have the chance meet the author herself, as Cheer from Chawton will be presented the weekend prior to the Pride and Prejudice opening. In a creative collaboration with the University of South Carolina’s School of Theatre and Dance, Cheer from Chawton is an internationally acclaimed one woman “Jane Austen experience” conceived, written and performed by professional actor and USC MFA graduate Karen Eterovich. Performed throughout the United States and UK, Cheer from Chawtonoffers an intimate glimpse into Austen’s life, including her pointed observations on family, friends, suitors, and society, as well as her own hilarious early efforts as an author. The play will be performed Friday and Saturday, September 28 & 29, 2012, 8 pm at Drayton Hall on the USC campus.

One thought on “I, Sir William Lucas, hereby invite every one of you to the ball we’ll be hosting next month”