At least, that’s what this is reputed to be. Sorry I can’t seem to imbed it here, but just click on the image at right and you’ll get to the clip (I love YouTube; I hate Facebook).

What you’ll see is an incident that may be the one described in this excerpt from the news story: 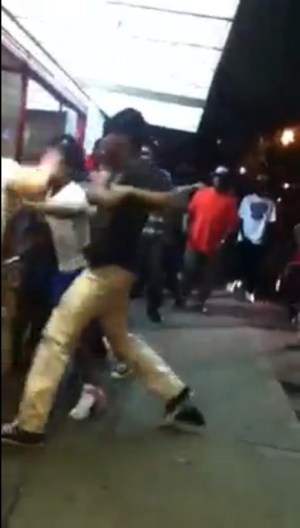 An assault that happened about 45 minutes after the gunfire also has received attention on social media.

At 2 a.m., a man was assaulted by a group of seven to 10 other men in the 700 block of Harden Street near Pop’s N.Y. Pizza and Bey’s, a bar. In that report, witnesses told police that the man walked out of one of those establishments when the group of about 10 men attacked him.

The group pushed the victim against a door and punched him until he fell, according to the incident report. Once he was on the ground, one or two of the attackers continued to kick him in the head and chest. All of the attackers ran away just before police arrived, the report said.

The victim had severe cuts and extreme swelling on his face and possible damage to his skull, the report said. He was taken to Palmetto Health Richland.

That was not the first group assault of the night…

That story dealt with violence getting out of control late in the evening in Five Points — two such beatings and a shooting the same night.

The good merchants of Five Points would like the local constabulary to put a stop to it. I heartily second that. No, the police can’t prevent everything, but it occurs to me that attackers can’t “run away just before the police arrive” if the police are already there.

35 thoughts on “Video of beating, apparently in Five Points”