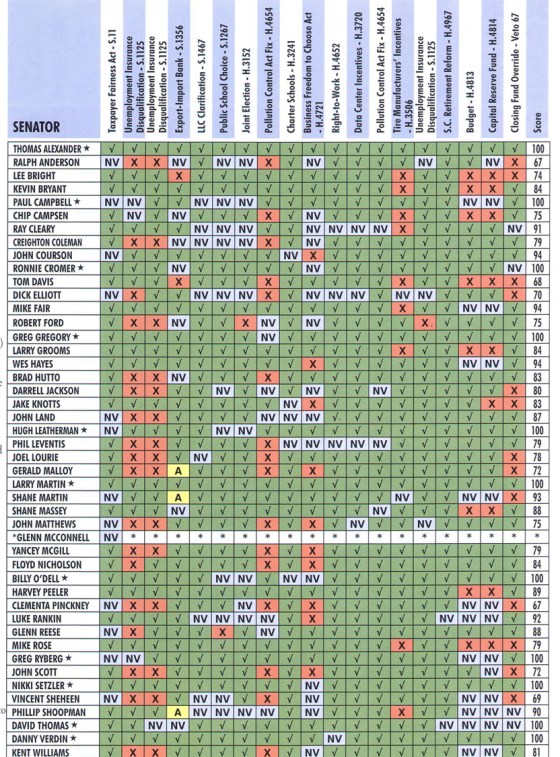 Today at the Columbia Rotary Club, our speaker was Darrell Scott, lobbyist for the S.C. Chamber of Commerce.

He talked about what he does for the Chamber over at the State House, and told some sea stories about his experiences (some people say “war stories;” I’m from a Navy family). The least convincing part of his presentation? A couple of times in explaining a close vote, he referred to the experience giving him “gray hairs.” Sorry, kid — I don’t see ’em.

Two things interested me in particular. One was the report card on the 2012 legislative session, which included grades for all of the lawmakers. You can see the full report here. I’ve reproduced the scorecard on the senators above. It’s interesting to see who stands well with the Chamber, and who does not. Some observations on that chart:

The other highlight of the meeting, I thought, was the exchange that came when attorney Reece Williams got up to ask young Mr. Scott a question. After explaining that he was a veteran of more than 200 jury trials, he asked the speaker how he would define that bete noir of the Chamber, a “frivolous lawsuit.” I enjoyed the way he asked the question — aside from the fact that he presented it in a civil, gentlemanly, even courtly manner (Reece is as nice a lawyer as you’d ever want to meet), as he spoke, he turned way and that to address the “jury” of fellow Rotarians, thereby gently suggesting that he was challenging each of us with the question as well.

The speaker answered him, but his answer wasn’t as memorable to me as what Realtor Jimmy Derrick got up to say in response. After explaining he and Reece are old friends, Jimmy said that he reckoned he had been sued about 200 times himself, and he pretty much considered those actions to be frivolous.

Afterward, I asked Reece what he thought of the answers he’d gotten. He said they pretty much confirmed what he’d thought before: “A ‘frivolous lawsuit’ is one that’s brought against me…”

8 thoughts on “What does ‘frivolous lawsuit’ mean to you?”