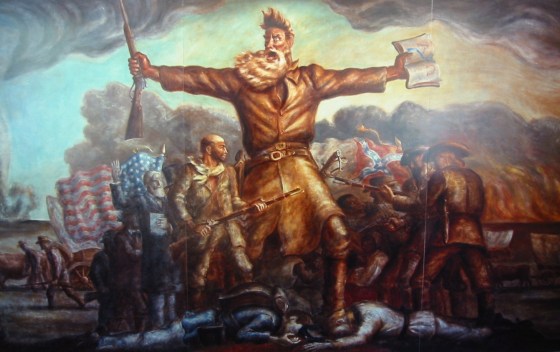 Here we have a more 19th-century understanding of the relationship between faith and politics...

A column in The Wall Street Journal this morning notes:

A hypothetical Martian with a deep interest in America’s political and cultural history would be surprised and perhaps amused at the religious composition of those running in the current presidential campaign.

I sort of knew all that, of course, but hadn’t put it together that way. And so it is that Protestant hegemony in American politics passes away, almost unnoticed.

After a review of times, especially the 19th century, when such would have been unthinkable, and some discussion of our growing secularism, the author concludes:

The eyes of all are still upon America, but it is a markedly different place. As the secularization of that city upon a hill continues, it is not hard to imagine a presidential race one day that involves candidates who practice no religion at all.

I’m not sure how to put this in a morally defensible way, since there is no way I can truly know the content or quality of another man’s soul, but… I’m wondering just how big a departure from the past that would be.

Let me just put it in generalities… Generally, I seldom believe that national politicians are as interested in religion as they let on to be. They are after all men, and occasionally, women of the world, not given to extended periods of contemplation. The world is so much with them that their pieties have a sort of formalism about them. Not that they’re lying or being hypocritical, just that… they’re more like, “Going to church is something you do, so I go to church.”

There are exceptions. Jimmy Carter was serious about his faith. I think Paul Ryan is, even though I think he’s really confused as to what “subsidiarity” means (which isn’t something most Catholics sit up nights thinking about, frankly). Rick Santorum is. I suppose, just on the basis of the time he’s put in, that Mitt Romney is, although I confess to such a lack of understanding of Mormonism that I’m not qualified to tell.

I think Joe Biden is sincerely Catholic, in the way of cultural, cradle Catholicism. It goes well with his hail-fellow-well-met manner, reminding me for some reason of the Belloc quote, “Wherever the Catholic sun doth shine, There’s always laughter and good red wine.” It sets him apart from gray-faced Calvinists, I think. And I think he truly cares, in a Catholic way, about the common folk from which he keeps telling us he springs, which speaks to the warm, human side of theology.

Barack Obama? I don’t know what to think, except to take him at his word about his faith. His adoption of Christianity as an adult is so tied in with his deliberate self-invention from being an unrooted child of uncertain identity that it’s hard to grab hold of (in one way — in another, I sort of identify with his journey). But I’ll put it this way, meaning no judgment of anything I have no right to judge: If asked to describe him, “religious” would not be one of the first words I mentioned — whereas with Jimmy Carter, and maybe Rick Santorum, it would be.

The president’s relationship with religion is of a sort that the more aggressively secular legions of his party can be more comfortable with, whereas one gathers that Jimmy Carter’s piety sort of gave them the willies.

Don’t know where I’m going with this; I just thought I’d toss those thoughts out there…

13 thoughts on “At the nexus of religion and politics”