First, I want to say that Mike Brenan gave a great speech at Rotary today, and I pretty much agreed with everything he said, from observations about education reform to the upcoming Richland County sales tax referendum. 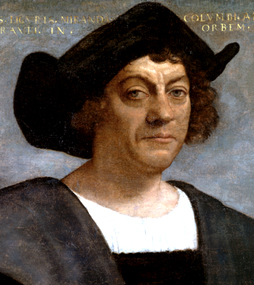 But I had to kid him a little afterwards about one thing he said. In the middle of a passage praising Adam Smith, free markets, individual initiative, personal responsibility and enterprise, he paused, this being the official Columbus Day, to extol Columbus as the original entrepreneur, a guy who had a great idea and went out and raised the funds to courageously pursue it.

Yeah, I said… but he did it entirely on a government grant. And he failed to do what he told his investors he would do — find a short sea route to China and the East Indies.

Christopher Columbus transformed the entire planet in ways that boggle the mind. To explore some of them, I recommend you read 1493, by Charles C. Mann. But as an entrepreneur, you might say he was sort of the Solyndra of his day.

12 thoughts on “Columbus, the Solyndra of the late 15th century”