Somehow I missed this yesterday…

Dick Harpootlian has had a terrible time getting Democrats to line up with him behind Robert Rikard, his chosen candidate to run against their favorite Republican, John Courson. Here’s the latest, in which Dick went overboard to the extent that even Rikard came to the sheriff’s defense:

“Just two months ago he accepted a $24,000 appointment from the Senator he now chooses to endorse,” Harpootlian said in a news release. “Voters in John Courson’s district see the pattern of Courson using taxpayers funds for his own benefit.”

Lott was out of town and unavailable to comment, according to a spokesman.

Democrat Robert Rikard, who is challenging Courson for the District 20 state Senate seat on Nov. 6, defended Lott, saying: “Leon Lott makes his own decisions, not based on what board he’s appointed to,” said Rikard, a former Richland sheriff’s deputy under then-Sheriff Allen Sloan… 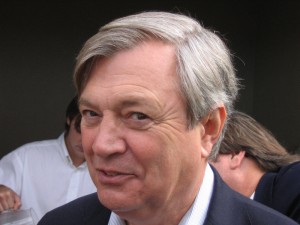 The chairman who can't get any respect.

Rikard’s right. Leon (whose birthday is tomorrow) knows his own mind. This is one of the things that bugs me about people who take the “follow the money” logic to extremes: It doesn’t occur to Dick (or he won’t admit that it occurs to him) that maybe Courson appointed Lott because he’s someone with whom he enjoys mutual respect, not the other way around. That sort of small-minded interpretation defies human nature. It supposes that Leon wouldn’t have backed the senator before, which is not reasonable to assume if you know the sheriff. And the assumption is grossly insulting.

Now a Democrat in a whole other race has seen fit to take issue with Dick’s one-man crusade against the president pro tem:

Columbia, SC – Democratic House candidate for district 78 released the following statement in response to SC Democratic Party Chairman Dick Harpootlian’s comments yesterday:
“I have known Sheriff Leon Lott for many years, so I was extremely disappointed when I read Chairman Harpootlian’s comments. Like Sheriff Lott, I have an independent streak…
That is why I am so proud that Sheriff Lott has endorsed my candidacy for House District 78. If elected, I will do what is best for the people of Richland County and not one political party.”
####

These Richland County Democrats just won’t get with the program, will they?