Here’s something you don’t see every day:

Gov. Chris Christie of New Jersey took an unscheduled break from partisan attacks on the President Obama on Tuesday to praise him, repeatedly and effusively, for leading the federal government’s response to the storm.

“Wonderful,” “excellent” and “outstanding” were among the adjectives Mr. Christie chose, a change-up from his remarks last week that Mr. Obama was “blindly walking around the White House looking for a clue.”

Some of Mr. Christie’s Republican brethren have already begun grumbling about his gusher of praise at such a crucial time in the election.

But the governor seemed unconcerned. When Fox News asked him about the possibility that Mitt Romney might take a disaster tour of New Jersey, Mr. Christie replied:

A governor who cares more about serving his (or her) state more than national partisan politics? Imagine that. If you live in South Carolina, you might find that difficult, but try… 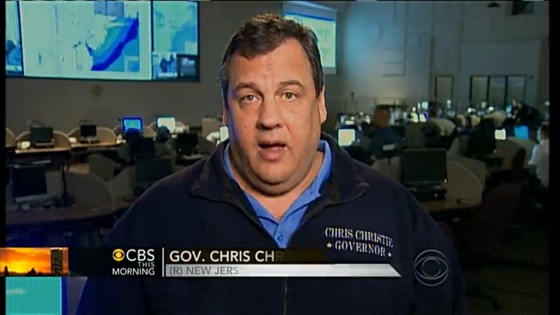