Got to say I was seriously underwhelmed by Apple’s news yesterday: 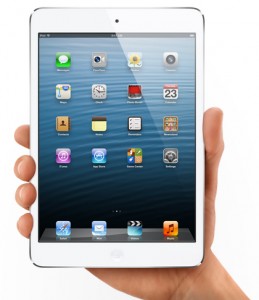 SAN JOSE, Calif. — Steve Jobs once mocked tablets with small screens, saying they would need to come with sandpaper so people could sand down their fingertips to use them. But that didn’t stop his company from shrinking the iPad.

Apple’s iPad Mini, which it unveiled at a press event here on Tuesday, weighs about two-thirds of a pound and has a screen that measures 7.9 inches diagonally, making its surface area significantly smaller than that of the 9.7-inch iPad. Philip W. Schiller, Apple’s vice president for marketing, said the smaller, lighter tablet would be a good fit for people who want something more portable than the 1.44-pound iPad.

The company is selling the lowest price Mini for $330, about $130 more than similar-size tablets from competitors…

So what burst of innovation will they come out with next — an iPad that’s between the iPhone and the mini in size, or one between the mini and the full-size? Or maybe a 60 inch, for that home-theater effect while you’re sitting in the coffee shop?

And in the WSJ in the same news cycle, Walter Mossberg was highly praising the new Microsoft tablet set to come out at the end of the week. Ouch, Apple.

All of this Apple angst brings to mind this hilarious sendup of the iPhone 5 complaints, from SNL a couple of weeks back…