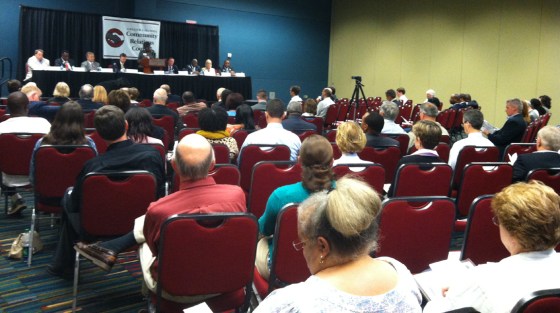 Before I head out to go moderate this forum at the library about the presidential election, I’ll share a few words about the Community Relations Council’s forum last night on the transportation sales tax referendum.

On the whole, it was a success I think, in terms of providing a civil place for folks on opposite sides of a local issue to share their views. Although sometimes the civility did seem to wear a bit thin. Redfern II has a somewhat loud, bombastic delivery style that can make it sound like things are getting out of hand, even when they are not. Michael Letts seemed to have quite a chip on his shoulder on the issue, but controlled himself. While on the “yes” side, I thought County Councilman Paul Livingston was going to lose his temper at the “no” folks once or twice.

Fortunately, things stayed in the realm of merely “lively,” which is a good thing. Moderator David Stanton did a good job.

One thing that made me glad, since I was on the committee, and since I tell anyone who wants to know that I’m for the referendum — I don’t think anyone can legitimately complain that the “no” side got short shrift in this forum. While the reasoning was better on the “yes” side — in my opinion, of course — there was more passion on the side of the “nos.” And I don’t say that to denigrate their arguments — they presented plenty of points that I’m sure were effective among a lot of the audience.

A quick summary of the positions presented by the panelists:

I take those mostly from the participants’ opening remarks, but they also give you an idea what went on the rest of the time.

As I said, a lot of energy on the “no” side. Three times, “yes” panelists were asked to speak up or get closer to their microphones. No one had to ask the “no” folks to do that.

And to the extent that minds were changed, it was in the “no” direction. The audience was asked to turn in ballots “voting” on the matter both before and after the event. Not everyone did, but here are the results from the ones who took part, according to CRC Executive Director Henri Etta Baskins:

73 thoughts on “Last night’s CRC forum on the penny”